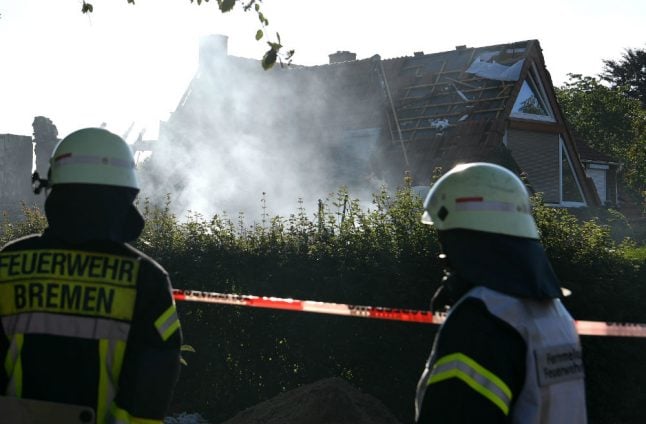 The still-smokey site of the explosion on Thursday. Photo: DPA

Police said later in the morning they didn’t expect any more people to be missing. The cause of the explosion was initially unclear.

Residents in the Huchting district of Bremen were awoken by a loud bang at around 4:30am, said Michael Richartz, a spokesman for the fire brigade.

The explosion occurred in the attic of the residential house, blowing off its roof and then causing it to burst into flames. It was so strong, it destroyed the house all the way to its foundation.

An adjoining house also caught fire, according to the police. The impact of the bang threw debris as far as 50 metres away. “I've never seen anything like it,” said Richartz.

Other adjacent houses were also badly damaged. “The fact that its inhabitants were not injured borders on a miracle,” the spokesman added.

Meanwhile an investigation involving some 70 firefighters is underway as to the cause of the explosion. “We're going to turn everything upside down with heavy equipment,” said Richartz.

Police forces ensured that houses within a radius of 100 metres of the site have been evacuated as a precautionary measure.

Earlier this week, an explosion also took place in the western city of Wuppertal, though no fatalities were recorded. Initially it was unclear what caused it.

Investigators now state that a tenant in the building where the explosion occurred likely manipulated the gas installation in his apartment in order to take his own life.

The alleged perpetrator is seriously injured and currently in a coma, which is why he hasn’t yet been interrogated, a spokesman for the public prosecutor's office in Wuppertal said on Tuesday.