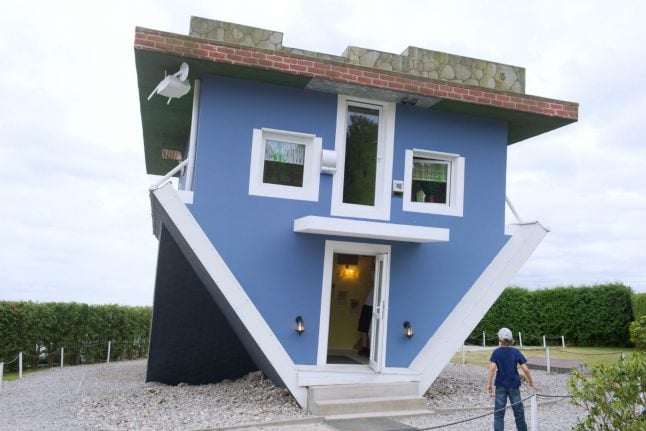 Germany is full of interesting attractions... Photo: DPA
Are you the kind of tourist that seeks out the strange or quirky attraction?
Maybe you’ve already seen the Brandenburg Gate or Munich’s Glockenspiel, so you want to find something a bit more… ermmm… off the beaten track. If so, look no further.
We have collected some of the most peculiar attractions nationwide you don't want to miss.
1. Dachshund Museum Hundreds of dachshund figurines accompany the exhibition at the Dachshund Museum. Photo: DPA
If you love these short-legged weiner dogs, then the Dachshund Museum may already be at the top of your list for “awwws”.
Located in the Bavarian city of Passau, this museum claims it's the only one in the world dedicated solely to these pint-sized canines. With exhibits ranging from the history of the Dachshund as a hunting dog in Germany to characteristics of the breed, this museum is jam-packed with Dachshund-themed toys, trinkets, photos and more.
And no need to worry: dogs are allowed to visit too.
2. The world’s narrowest alley With juuuust enough room to squeeze through, Germany offers tourists the chance to see the narrowest alley in the world. Photo: DPA
Want to see something your mates have probably never seen? Then Spreuerhofstraße may just be what you are looking for.
Located in Reutlingen, Baden-Württemberg, Spreuerhofstraße is the bonafide Engste Straße der Welt (narrowest alley in all the world). That's at least what the Guinness Book of World Records says.
Not ideal for the claustrophobic, this lane (you could probably call it a crack) ranks in first place as narrowest street by measuring in at 31 centimetres at its narrowest and 50 centimeters at its widest.
3. The Great Heidelberg Tun

The Großes Faß is Heidelberg's version of the ultimate keg. Photo: Wikimedia Commons
Now, this one is just a rip-roaring good time.
The Great Heidelberg Tun, or Großes Faß, is a gigantic wine vat housed within the cellars of the majestic Heidelberg Castle.
The container itself is made of wood from over 130 different oak trees and has a capacity of roughly 219,000 litres. Talk about a good wine party.
Today, the vat is not used to store wine, but does attract tourists from around Europe. As an added bonus, a dance floor has been constructed on top of the vat, in case the boozy atmosphere makes you feel a bit footloose.
5. Frankenstein Castle
The Frankenstein Castle may look innocent during the day, but it was once the home of a real scientist. Photo: DPA
If you also had to read Mary Shelley’s Frankenstein in school, you may want to see the spooky home that is believed to have inspired it all.
Burg Frankenstein, or Frankenstein Castle, lives up to the book's creepy reputation. The large castle sits broodily on a hill overlooking the city of Darmstadt in Hesse; it is believed to be the inspiration for the sci-fi novel given its name and the related history that occurred within its walls.
Johann Conrad Dippel, a real-life scientist who is said to have experimented with human body parts, once resided in the castle. That, combined with its secluded location in the middle of the Odenwald forest, makes this castle one of the scariest places in Germany.
If you are looking for a good scare, be sure to visit this haunted home for Halloween; the castle annually hosts a big Halloween programme filled with monsters and booze.
READ MORE: Our 5 worst German tourist traps – and top alternatives
6. Upside-Down House
Some priceless pics are waiting to be taken in this kooky house. Photo: DPA
This one is literally topsy-turvy: a cottage-style house built from floor to ceiling completely upside down.
This giggle-inducing house is located in the town of Putbus on Rügen Island, which is a part of Mecklenburg-Western Pomerania. With the roof on the ground floor and wine cellar in the sky, this house offers full tours for a small fee for those seeking a bit of whimsy.
The Kopf Über Haus (Upside-Down House) promises an ideal Instagram-able moment, because really, where else will you be able to stand on the ceiling above an immaculate breakfast table?
7. Ferropolis If you're looking for something industrial, maybe give the city of Ferropolis a spin. Photo: DPA
If you are trying to see something other-wordly, this place may be the dystopian fantasy you are seeking.
Ferropolis, also called “the city of iron”, is an open museum filled with huge, old industrial machines from the 20th century. These gigantic structures measure up to 30 metres high, 120 metres long and weigh as nearly 2,000 tonnes.
While the place may look like something out of the movie Mad Max, this odd attraction in Gräfenhainichen, Saxony-Anhalt, gives a decent look into the industrial boom of the past.
Attention music lovers: built on the site of a former strip mining operation, Ferropolis is also where many of Germany’s prominent music festivals take place, including Melt!, Splash! and Ferropolis in Flammen (Ferropolis in flames).
8. The Berlin Museum of Medical History at Charité Hospital With diseased organs, fetuses, and much more, this attraction is not for the weak of heart (or stomach). Photo: DPA
Medical oddities are on display in this museum located in a Berlin hospital. Charité is a word-renowned hospital that has often been at the forefront of medical procedures, but not without having a few mishaps along the way.
In this museum, visitors will find all sorts of gory goodies, like the permanent exhibition of deformed brains, and one of the largest collections of skulls, diseased organs, fetuses and limbs in the world.
But this attraction is certainly not for the faint of heart. Director Thomas Schnalke told Spiegel Online that visitors have even fainted at the sight of some exhibits, falling down and “hitting their heads against the building's stone floor.”
9. Kunsthofpassage's Singing Drain Pipes
Bet you've never seen a wall sing – now you can in Dresden. Photo: DPA
While most of us love touristing in the sunshine, this Sehenswürdigkeit (attraction) is seen best in rainy weather.
Dresden’s Funnel Wall, also called the singing drain pipes, is part of the city's hip student district  and this art piece is like no other. When it rains, the funnel pipes actually play music.
Created by sculptor Annette Paul and designers Christoph Rossner and Andre Tempel, the musical pipe system uses the rainfall to create an orchestra-like sound with its various horn instruments.
10. Wuppertal Suspension Railway
It may look more like a rollercoaster than a railway, but this suspension train is a fun find in North-Rhine Westphalia. Photo: DPA
If weird travel excites you, maybe this attraction should be next on your list of sites to see.
The Wuppertaler Schwebebahn, or Suspension Train in Wuppertal, North Rhine-Westphalia, is an electric elevated railway that hangs high above the city centre. It’s the world's oldest railway of its kind, topping out at 117 years young, and is still in normal use.
The high-rise train has transported more than 1.5 billion passengers in its long life between its 13.3 kilometres of track, offering scenic views of the river Wupper and local life.
While maybe a bit out of the way for a short train ride that doesn't leave the city of Wuppertal, for train geeks, the Schwebebahn offers the chance to experience a very unique kind of historic train.
FOR MEMBERS: How riding Germany's local transport really helps you get under a city's skin