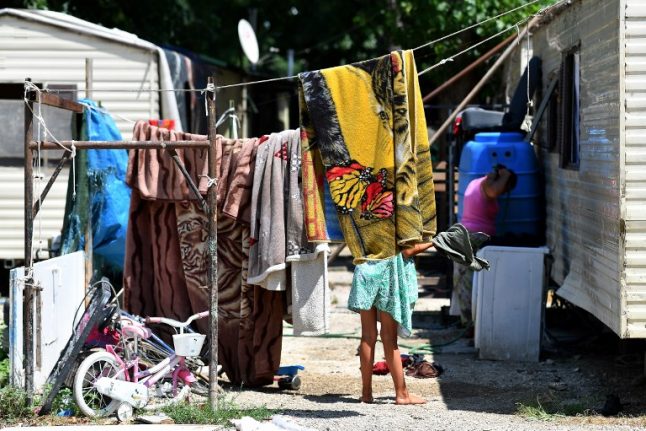 Salvini, already under fire for refusing to take in a rescue ship carrying 630 migrants, sparked outrage on Monday when he promised a head count of Italy's Roma community and to throw out those without legal status.

His call was blasted as unconstitutional by rights groups and even criticized by members of his own coalition government, with some in Italy drawing parallels with measures targeting Jews under fascist wartime leader Benito Mussolini.

“If he [Salvini] comes here, we will welcome him with kindness. He needs to see how we live,” says Habibi Mehmedi, 18.

The teenager is speaking to AFP in River Village, a camp located outside Rome's main ring-road and well away from the eyes of the office workers and tourists who crowd the historic centre.

“There are some who do bad things, but most of us are Italian and have not committed any crimes.” Marcello Zuinisi, founder and legal representative of Associazione Nazione Rom, an organisation that lobbies for the rights of Roma people in Italy, says he doesn't expect much action to follow Salvini's threats.

“I know Matteo Salvini, we've had a number of conversations,” Zuinisi says. “I don't think he is going to do anything. It's just talk.”

Zuinisi showed AFP a message he sent to Salvini saying that Italian statistics agency Istat had already prepared a dossier on where the various Roma communities live.

“Later that day he changed tack and starting talking about how he wanted to see where funds from Europe have gone. He listened to me.” Zuinisi says that last week his association went to Brussels seeking a European Commission investigation into the use of €7 billion of structural funds given to Italy to provide housing, jobs, schooling and health care to both Roma communities and homeless people.

“But we didn't get anything in the camps, not even an aspirin,” says Zuinisi.

Non-profit organisation Associazione 21 Luglio estimates there are between 120,000 and 180,000 Roma, Sinti and traveller people in Italy, of whom roughly 16,400 live in 148 formally recognized camps like River Village. It says around 9,600 live in smaller, informal camps, largely populated by Romanians.

The formal camps are distributed in 87 different towns and cities across the country. Of their residents, 43 percent are Italian citizens, while the rest come from ex-Yugoslav countries – around 3,000 of whom are stateless.

In Rome there are 17 camps, of which just six, including River Village, are formally recognized. Despite Roma making up at most 0.3 percent of Italy's population, they are subject to extreme hostility from the general public. The taxi driver that took AFP to River Village advocated taking a flame thrower to the camp.

The people living in Roma camps are often blamed for a variety of petty crimes like pick-pocketing, copper theft and break-ins.

Two of Rome's major organized crime gangs are headed up by two long-settled Sinti families that control drug distribution in certain sections of the city. In April police arrested ten people in River Village after they found an illegal rubbish dump and a vehicle stolen from Rome's waste management company.

To gain access to the camp reporters had to pass a police checkpoint at the end of an isolated road that leads towards the Tiber river. Zuinisi says there are 127 households in the camp, living in camper vans and small prefabricated structures, with about 180 children. River Village is, says Zuinisi, probably the best Roma camp in the capital. He says that every child in the camp goes to school – although with the summer holidays in full swing, youngsters charged in between the camper vans.

Others have had much more serious problems with poverty, criminality and sanitation. In September the Castel Romano camp to the south of the city saw cases of scabies among its residents.

However, River Village has no running water, and the water that the camp's inhabitants use is delivered in bottles by a private company.

“And thank God they do! can you imagine what it would be like in here with this heat if we weren't sent water?” says Albert Hasimi, an 18-year-old Kosovan who has lived in Italy almost all his life. Hasimi says his family fled Kosovo following the 1989-199 war. Because he was born abroad to two foreign parents he has to apply for Italian citizenship now he is legally an adult, which he says he will do next month in the hope of better prospects.

A bigger issue than the conditions in River Village is work. Mehmedi says there is little opportunity for anything other than irregular cash-in-hand labour.

“We get by selling things at the local markets,” he says. Hasimi says it is hard to find work for the simple reason that employers do not want to hire Roma people.

“They ask you where you're from and when you tell them that you're Kosovan and Roma they tell you they won't hire you. It's racism.”

Mehmedi adds: “Everyone says that the gypsies rob and steal. But the Camorra [Neapolitan mafia]? They think their race is better than ours. It's that simple.”