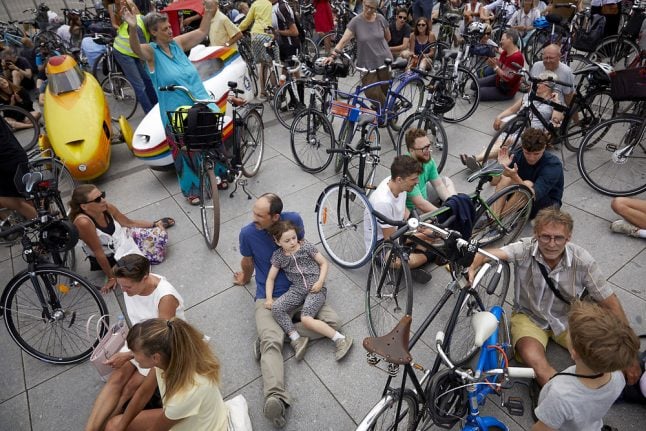 Bicycles at Israels Plads in Copenhagen on June 10th, where they were photographed as part of an international project to document sustainability. Photo: Jens Astrup/Ritzau Scanpix

Recent sunny weather has resulted in more traffic on Denmark’s cycle paths. The increased number of cyclists creates more space on roads and is beneficial to both health and the economy, writes dibusiness.dk.

It would be better still, however, if more Danes also opted for their bikes instead of car the rest of the year, according a new analysis carried out by consulting firm Incentive on behalf of the Confederation of Danish Industry (DI).

The study examines how road traffic, the number of sick days and the economy would be affected if the annual amount of cycling increased by just 10 percent.

In total, the number of sick days would fall by 267,000, of which 112,000 would be work days. That conclusion is based on previous analyses which have found that cycling an extra 1,200 kilometres annually results in one fewer sick day, the report states.

Finally, the number of traffic congestion hours would fall by six percent in the capital region, where the effect of more cyclists would be most tangible.

According to Michael Svane, director of the Federation of Danish Transport, the calculations underline the importance of initiatives that aim to turn even more Danes into avid cyclists.

“It is no surprise cycling is generally a good thing for Denmark. But I was not expecting that the effect on economy, public health and road traffic would be so great. It gives food for thought,” Svane said.

“These calculations give us some big and very specific numbers for how much there is to gain if more Danes choose their bike over the car,” he added.

One company that is already taking steps to get more employees to cycle is Agilent Technologies in Glostrup.

In a survey of employee transport habits, Agilent Technologies found that a large group of its employees with a commute of less than 15 kilometres still choose to drive to work.

There is much to be gained if these employees opt to cycle instead, not least because of increased local expected in coming years, with the forthcoming construction of Copenhagen’s light rail, Agilent Technologies HR director Lene Klejs Stuhr said.

“We think it will increase employee satisfaction if more people cycle instead of ending up stuck in traffic… We therefore want to encourage more employees to consider their bike as a means of getting to work,” Stuhr said.

“The construction of the light rail will impact us to such a degree that it will affect our employees’ journeys to and from work. It could potentially make some of our employees look around for another job – and that’s something we want to avoid,” she added.

In an effort to foster a cycling culture, the company is looking into the possibilities for a lending scheme whereby employees could borrow various types of bicycles, such as cargo, electric and road bikes, to try cycling to and from work, the HR director said.

“Our success criteria is that we don’t experience increased employee turnover in coming years. Encouraging more people to cycle to work could be one way to ensure this,” she said.

Svane praised companies that, like Agilent Technologies, are taking responsibility for the transport habits of employees and encouraging people to cycle.

The director of the Federation of Danish Transport said the establishment of a national cycling fund could support more targeted efforts to promote cycling.

“Getting more people to cycle to and from work is in everyone’s interest,” Svane said, adding that increased cycling will also benefit car and lorry traffic.

“The more people who cycle, the more space there is on roads for the traffic for which there is no alternative,” he said.