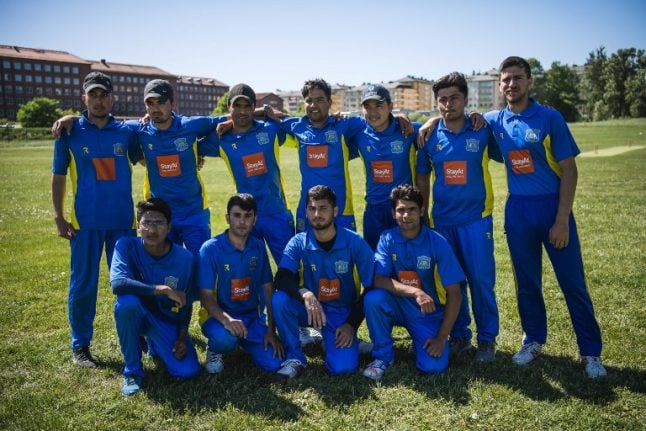 In a country where ice hockey reigns supreme, cricket was barely seen here ten years ago. But it has exploded in popularity recently and now boasts 65 teams in towns across Sweden.

“Three or four years ago, we had only 13 clubs in Sweden and the number of players was around 600 or 700,” said Tariq Zuwak, chairman of the Swedish Cricket Federation.

With four divisions, the federation now counts more than 2,000 players: half have acquired Swedish citizenship, the other half are still waiting. Just a handful of members were born in Sweden.

With the visor of his cap shading his eyes from the sun, his face showing signs of exertion after a match, 18-year-old Saeed Ahmed is one of the recently arrived players.

He began playing cricket as a young boy in his native Afghanistan. Arriving in Sweden in 2015 after a perilous and exhausting journey, signing up with a cricket team was a top priority.

Ahmed hopes to improve his game even further. On this unusually hot spring day in central Stockholm, he needs just 30 minutes to prove to Under-19s coach David Williman that his hard work is paying off. “It was tough,” admits Ahmed, originally from Jalalabad in eastern Nangarhar province.

And no wonder: the young Afghan has just played against one of the best known cricket teams in the world: London's Marylebone Cricket Club (MCC) which holds worldwide responsibility for the sport's rules, known as Laws.

The MCC team is in Sweden to instruct players on the official rules of the game, played by millions of people, predominantly in Britain's former colonies in Asia.

Facing off against the “Real Madrid of cricket”, as the Swedes jokingly call MCC on the sidelines, they lose the game but have a blast nonetheless.

The number of cricket teams in Sweden has more than quadrupled in just a few years, a rise attributed “mainly to the global situation in recent years,” Zuwak said. As Sweden grappled with the massive influx, the cricket federation also found itself having to adapt, creating new teams across the country. It also created two new positions, including one dedicated solely to integrating new arrivals into Swedish society.

Playing cricket is a way for the asylum seekers to clear their thoughts and forget the troubles that hang over them while their asylum applications are being processed.

“The youngsters miss their families and are worried about their asylum process. But when they play cricket, there is nothing else on their mind than having fun,” said federation chairman Zuwak. It's also a way to avoid being brutally cut off from their roots.

“I've made friends here who also come from Afghanistan,” said Ahmed, who plays for a team in the suburb of Huddinge, south of Stockholm. The youngster now hopes to take part in the qualifying matches in England in July and August for the Under-19 World Cup.

Meanwhile, Sweden's national squad, coached since May by former Pakistan cricketer Mohammad Wasim, will this summer play for the second time in the qualifiers for the ICC World T20 — a shorter and more spectacular version of traditional cricket — with the hopes of playing against the world's best teams in Australia in 2020.

IN DEPTH: How is Sweden tackling its integration challenge?