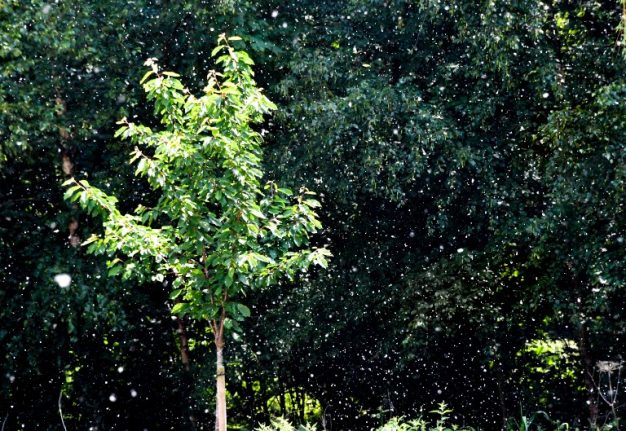 Pollen in Godewaersvelde, France in late May. Photo: AFP

Unseasonably warm and dry conditions in April and May have seen pollen levels spike – especially when it comes to birch trees.

This has resulted in a run on hay fever medications with demand running at twice usual levels.

Supplies of Telfastin Allergo, which is produced by Sanofi were particularly hard hit until recently, although shortages have eased this week, the firm told Switzerland’s Radio SRF 1 on Thursday.

Meanwhile, the generic antihistamine Fexofenadine Zentiva, produced by a subsidiary of Sanofi is still in short supply.

Pharmaceuticals firm Sandoz says it is also struggling to keep up with international demand for Fexo Pollen Sandoz and Fexofenadin Sandoz.

The company said it expected supplies to Switzerland to return to normal over the course of this month.

A Sanofi spokesperson said that despite that fact that high pollen levels were already in evidence in April, that had been too late for pharmaceutical firms to react.

Pharmacists also told the radio show that some customers had reacted angrily to the shortages.

The Bern University of Applied Sciences and University Hospital Zurich in April launched a new app for pollen allergy sufferers.

The free app, available in English as well as the four Swiss national languages, forms part of the largest ever scientific study into pollen allergies to be carried out in Switzerland.

It allows allergy sufferers to keep a record of their condition. They also receive pollen forecasts and an exclusive representation of the current development of allergy symptoms in the different regions.

Around two million people suffer from physical complaints during the pollen season, according to the Bern University of Applied Sciences.