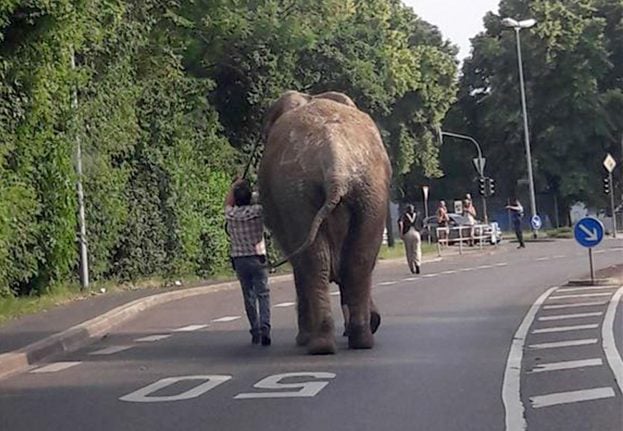 Kenia walks down a street in Neuwied. Photo: DPA

The African elephant Kenia trotted calmly down the main street of the sleepy western town, apparently oblivious to the cars and pedestrians that it wandered past.

According to police reports, Kenia most likely managed to tear the electric fence of its circus enclosure before taking a “short and peaceful excursion” around the town. The animal walked about one kilometre before being recaptured and led back to the circus premises.

Numerous videos, some of which showed onlookers getting dangerously close to the animal, were shared on Twitter.

Police reported that nobody was injured during Kenia’s short outing and there was no disruption to traffic except the temporary closure of Berggärtenstraße.

This isn't the first time circus animals have roamed free in Germany.

In March, two zebras broke out of a circus in Ludwigshafen, another town in Rhineland-Palatinate.

In Aldenhoven in North Rhine-Westphalia, three camels escaped in December last year and made themselves at home in a residential area.

In May 2017, camels caused more confusion in Pulsnitz, Saxony, when they broke out of their enclosure. But circus employees eventually found them quietly eating next to a tree.