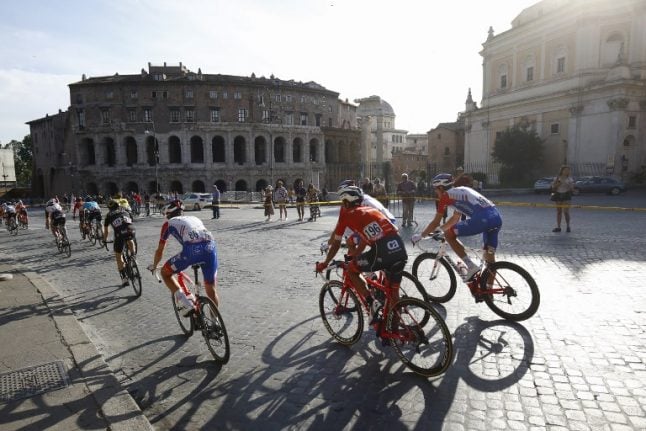 The race was scheduled to conclude on Sunday with ten laps of an 11.5 kilometre loop that took in the capital's ancient Colosseum and Roman Forum, the first time its route passed the two landmarks.

But organizers froze the stopwatches after the third lap after riders raised safety concerns about Rome's cobbled streets and infamous pothole problem. Cyclists were forced to pull over to deflate their tyres for extra cushioning after discovering the challenging conditions, and some threatened to stop altogether. After the organizers' decision they continued riding, but not racing, for the remaining laps.

Critics of Rome's mayor, Virginia Raggi of the Five Star Movement, called the incident an embarrassment, despite the city council's last-minute efforts to patch the roads along the route. The busy shopping street Via del Corso was specially repaved, with workers labouring overnight until the morning before the race.

Amateur bikers well know the dangers of cycling in Rome. Greenpeace recently ranked the city the worst of 13 European capitals for road safety, with 25 cyclists killed in 2016. The winner of the race was Britain's Chris Froome, who triumphed in an impressive comeback after two falls early on.

Froome is now the reigning champion in all three of cycling's Grand Tours — the Giro d'Italia, Tour de France and Vuelta a Espana – and becomes only the third rider to achieve the feat after Belgian Eddy Merckx (1972/73) and France's Bernard Hinault (1982/83).

“I'm still pinching myself. I can't believe I'm here,” said the six-time Grand Tour winner. “This is the dream to have all three jerseys in the space of ten months. It's an incredible feeling.” However, his title is in danger if he is sanctioned by anti-doping authorities.

Froome is the subject of an ongoing investigation following doping tests during last year's Tour of Spain, whch he won. Double the permitted amount of the asthma drug salbutamol was found in his urine during the tests, though he has a Therapeutic Use Exemption (TUE) which allows him to use the drug, and so escaped a provisional suspension.