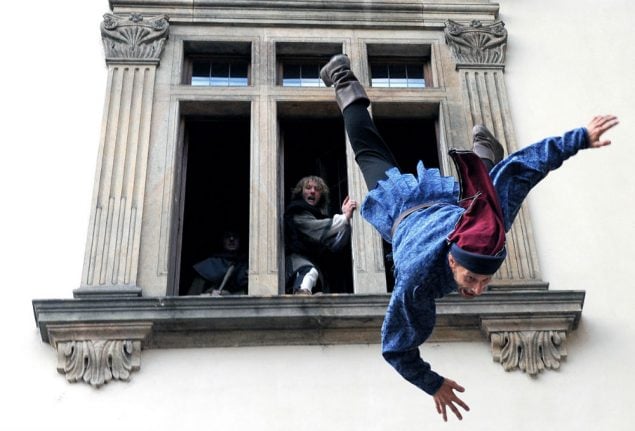 On May 23rd 1618, growing tensions between the largely Protestant nobility of Prague and the Catholic ruling family of the Holy Roman Empire finally came to a head.

The nobility were upset at what they saw as the royal family rolling back concessions made to Protestants in the wake of the Reformation. Specifically, the Peace of Augsburg in 1555 had set out the principle of “cuius regio, eius religio,” which allowed princes in the highly decentralized empire to pick the religion of their princedom.

But when Ferdinand II, a hardliner, who passionately believed in a Catholic counter-reformation, was named as heir to the throne in 1617, it seemed that this period of religious tolerance was over.

The noblemen’s fear that the relatively tolerant rules of Rudolf II and Matthias would come to abrupt end were almost immediately confirmed. In 1618 Ferdinand issued a ban on any further Protestant chapels being built on royal land in the Kingdom of Bohemia, where Prague was the seat of power. When the Protestant noblemen complained, he simply dissolved their assembly.

In response, the noblemen seized Ferdinand’s representatives in Prague, Vilem Slavata of Chlum and Jaroslav Borzita of Martinice, along with their secretary, and threw them from a window in the city castle.

READ ALSO: The gruesome story of a radical Isis-like movement that once ruled Münster

The men were badly injured but survived the 21-metre fall by landing in a muck heap. The attempt to kill the king’s representatives in the city almost inevitably led to war.

Two years later the Holy Roman Emperor won a major victory at White Mountain just outside Prague. But victory there was to prove pyrrhic. Over three decades, armies from Sweden, France and Spain entered the battlefield in Germany, fighting either on the Catholic or the Protestant side.

Only in 1648 did peace finally return to Germany when the treaty of Westphalia was signed.

The devastation that took pace across what is now Germany was comparable only to the Second World War in its scale.

Swedish armies alone are estimated to have destroyed around 18,000 villages and 1,500 towns. In areas of modern day Brandenburg, 50 percent of the population died, either of starvation, disease or in battle. Over the entire German-speaking world, historians estimate that a third of the population was wiped out.

In the words of Christoph Kampmann, a historian at Marburg University: “There can be no doubt today that the war was a catastrophe. Only a century later did the German Reich recover demographically from its consequences.”