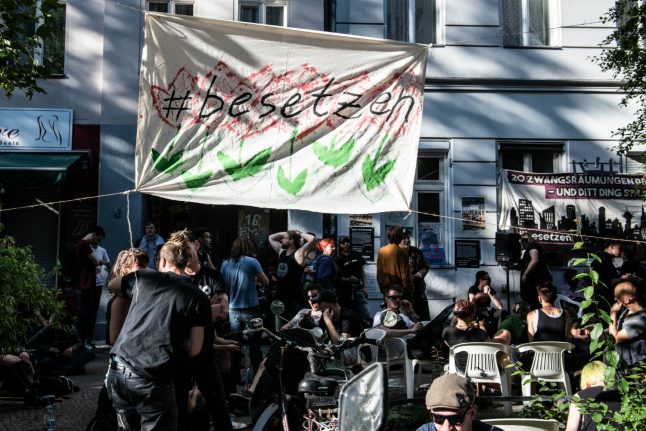 Demonstration in front of a building on Reichenberger Straße in Kreuzberg. Photo: DPA
On Sunday, protesters occupied multiple apartments across Berlin, mainly in the neighbourhoods of Neukölln and Kreuzberg.
Squatters entered several vacant buildings in the city in protest against the precarious state of the city's rental market. In addition to physically occupying the locations, the demonstrators also hung banners from windows with slogans like “housing is a human right” and “house those who are inside”.
Berlin police reported a total of eight houses that were occupied as part of the Besetzen (Occupy) movement, though in six of those cases there were no people found inside the buildings.

Police evictions
In the Neukölln and Kreuzberg neighbourhoods, police raided two occupied buildings on Sunday evening and into Monday morning. Following the removal, police reported that 56 people were under investigation for trespassing in one Neukölln location.
The owner of the building at Bornsdorfer Strasse 37b made a written eviction request before police carried out the raid.
Activists came out in criticism of the police operation on Monday.
“Some people were injured in a violent police intrusion,” reported an occupation source. Berlin police, however, stated that the evacuation took place without incident.
Police were also present on Reichenberger Strasse in Kreuzberg, where a large contingent of protesters had gathered on Sunday in front of an empty store front.
According to reports from local newspaper Berliner Morgenpost, there were about 100 people involved in the demos at the Neukölln and Kreuzberg locations.

'Illegitimate that houses are empty'
On the protesters' website, the squatters criticised that tens of thousands of people in the capital are homeless and that those who do have homes have to spend and ever-increasing share of their income on rising rents. They claimed that, in view of the precarious housing market, it is “illegitimate that houses are empty”.
The house on Bornsdorfer Strasse in Neukölln has stood empty for over five years, according to the protesters. Tagesspiegel reports that activists had negotiated prior to the occupation with the owner, a state housing company, to rent out the apartments at affordable prices.
'Politically wrong'
Left-wing politicians expressed sympathy for occupiers motives on Monday.
“I consider the clearance of the residential house in Neukölln politically wrong,” mayor of Friedrichshain-Kreuzberg, Monika Herrmann of the Green party, told newspaper Welt.
The Berlin leader of Die Linke, Katina Schubert, described the concerns of the occupiers as justified. “Nationwide laws protect private profit for owners and speculators – including profit on living space – more than people's need for sufficient living space,” she said.
However, politicians in the Social Democrats (SPD), Christian Democrats (CDU) and Free Democrats (FDP) rejected the protesters' tactics.
Sebastian Czaja, chairman of the FDP faction in the Berlin Senate, called the demonstrators “offenders” who should be “treated accordingly”.
READ MORE: 'In Berlin's housing market people are getting mad, getting scared'