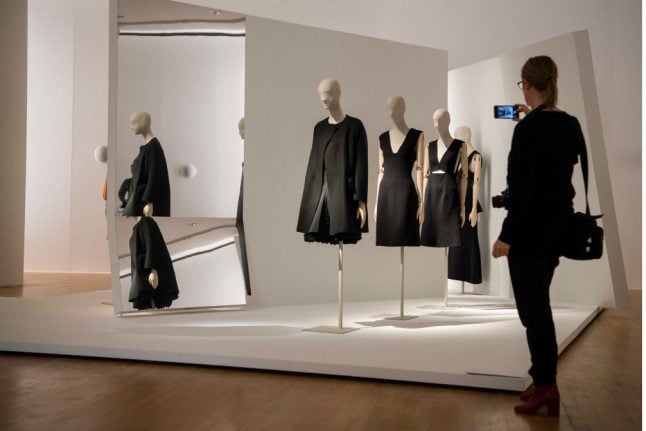 But although she took her last runway bow in 2013, fashion's “Queen of Less” isn't resting on her laurels yet.

The 74-year-old recently delved into her archives for her first-ever solo exhibition in Frankfurt, a large-scale retrospective spanning the breadth of her career and an unexpected move by the publicity-shy designer.

“I was positively surprised by the fact that many of the designs didn't seem dated to me,” Sander told AFP in a rare interview by email.

The exhibition, whose six-month run ended this month, showcased everything from Sander's expertly tailored coats and dresses to her popular cosmetics line and artistic collaborations, highlighting her lasting impact on what is considered modern in fashion even today.

Matthias Wagner K, the director of Frankfurt's Museum Angewandte Kunst (Museum of Applied Arts) who persuaded Sander to do the show, said the artist always had a knack for “capturing the zeitgeist” while staying true to herself.

“To me, Jil Sander is one of the most important fashion designers of her generation,” he said.

Drawing over 100,000 visitors, the “Jil Sander: Present Tense” exhibition has been one of the museum's most successful to date and Wagner K is in talks to bring the show to Japan and the United States next.

Just 24 years old when she created her label in her native Hamburg in 1968, Sander says it was her own need for elegant, no-nonsense business clothes that spurred her on.

“In the 60s, as a woman, you couldn't find a decent pair of trousers. In order to be taken serious, I felt, I needed a less ornamented wardrobe.”

Marvelling now at the “naive confidence” with which she built her brand, she says she was emboldened by the sense of renewal that swept through Germany in the decades after World War II, “the hope that things could be constructed with the back to the past”.

Perhaps ahead of her time, it wasn't until the 1980s and 1990s that her muted palette and menswear-inspired look really took off, turning the Jil Sander name into a global brand.

In 1999, Sander sold a controlling stake in her company to the Prada Group. Almost immediately, she fell out with her new bosses and famously quit soon after.

She was wooed back in 2003 to boost disappointing sales, before walking out again the following year.

The company then changed hands twice, with current owner, Tokyo-based Onward Holdings, buying it for €167 million in 2008.

Sander returned to the label in 2012 but stepped down for good three seasons later, citing “personal reasons”.

According to German media she wanted to be with her long-term partner Angelica Mommsen, who was battling cancer and died in 2014.

Sander says she still feels “very connected” to her eponymous brand despite no longer being professionally linked to it — likening it to rooting for the children after a divorce.

“You want them to strive and be in a good place.”

Often hailed as a feminist icon for giving women a practical, feminine wardrobe that eschews overt sexiness, Sander herself demurs at the moniker.

“I would hesitate to call myself a feminist, because my nature isn't militant. We should work together,” Sander said, stressing that she “never felt at a disadvantage” to male colleagues.

Sander says she has been “troubled” by the accounts of sexual harassment and assault in the fashion industry that have emerged in the #MeToo era — setting her apart from compatriot Karl Lagerfeld who recently said he was “fed up” with the moaning.

“It should be possible to deal respectfully with models,” Sander said.

Despite retiring from her own brand, Sander isn't done nurturing her creative side.

“My mind doesn't stop playing and experimenting with ideas,” she said.

She continues to visit textile fairs and is still “very much involved” with contemporary art, a longtime source of inspiration.

And of course, she can't help but pay attention to what women are wearing today.

“I'm happy to see that overdressing is no longer popular,” she said.

“You don't need much grooming, knowing what works for you and employing pieces with great fit and comfort, no matter how basic, does a lot.”

And while she made her name as a luxury designer, Sander insists quality doesn't have to be expensive.

The low-cost clothes she designed for high-street retailer Uniqlo between 2009 and 2011 are among her all-time favourites, and she still wears them.

“But I'm slowly getting desperate for new pieces.”