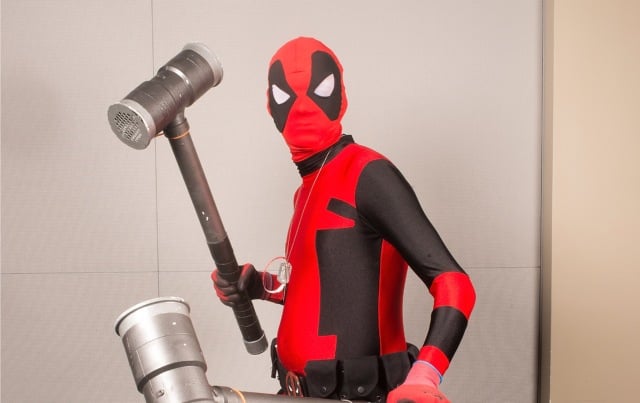 Cosplayers dressed as Harley Quinn and Deadpool in London in 2017. File photo: AFP

Police tackled him and a friend to the ground after apparently failing to recognise he was a cosplayer dressed in character.

A photo of the incident shows police surrounding the man dressed in red. Two of the officers appear to have weapons drawn. In the left of the photo, police can be seen cuffing the man’s friend who was not in costume.

But it quickly become clear that the suspect was actually dressed as the wisecracking Marvel antihero.

Authorities were mocked on social media after the incident with Swiss supermarket giant Migros even using the incident to advertise a peel-off mask in Ticino, saying “with this you won't get arrested”.
But police defended their actions on Monday saying there had been reports of a suspect in possession of two weapons in the centre of Lugano.

“The procedure was part of operational tactics. They [police] have to intervene as quickly as possible when they receive this type of information,” a police spokesperson told the tio news site.

The incident came just days after police in Ticino arrested a 19-year-old suspected of planning a massacre at a school in Bellinzona.

Alessandro Botta, the friend accompanying the man dressed as Deadpool to the cinema, told tio the cosplayer had been tackled to the ground and arrested because he had broken the law by covering his face.

A so-called burqa ban introduced in the region in 2016 prohibits clothing that obscures facial features.

“I had also thought about dressing up to go to the cinema but my friend was already masked. Neither of us thought it would be problem,” Botta explained.

“I have to say that after the initial tension the police also realised what we were doing. The officers had a good laugh about it.”

“But my friend will still have to pay a fine as he broke the law,” Botta said.

The maximum fine under the Ticino burqa ban is 1,000 francs.