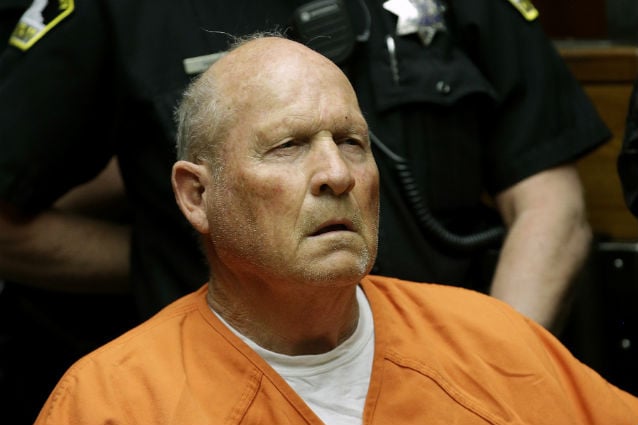 Joseph DeAngelo, shown here at his first court appearance in California, was identified using DNA uploaded to family tree websites. Photo: Rich Pedroncelli/AP
Bo Lundqvist, who heads the cold cases group for the police in southern region, told Swedish Radio that DNA evidence had been collected in several of the 130 cases he is trying to crack.
“I have a number of cases in mind to which this could be applicable in this situation,” he told Swedish broadcaster SR.
At the end of last month, police in California claimed to have caught the Golden State Killer, who is suspected of committing 12 murders and at least 50 rapes between 1976 to 1986, by using DNA uploaded to family tree websites.
They identified the former policeman Joseph DeAngelo, 72, 40 years after his first attack, by matching DNA found at the scenes of his crimes, with that uploaded to the GEDmatch ancestry website by his relatives, the New Scientist magazine reported.
According to Lundqvist, Swedish murder investigators have been given the green light by a prosecutor to test similar methods in Sweden, where an estimated 40,000 people have registered their DNA on family tree websites such as Ancestry.se.
According to the New Scientist, DNA Ancestry sites such as 23andme say they resist police inquiries unless presented with a court order, making it difficult to carry out the sort of ‘fishing exercise’ which could help Lundqvist make progess on his cold cases.
Lundqvist told Swedish Radio that he recognised that there may be ethical issues with the technique.
“But if we are investigating the most serious crimes, there is probably sufficient justification,” he said. “You might think it’s unethical, but it’s not nearly as unethical as murder.”