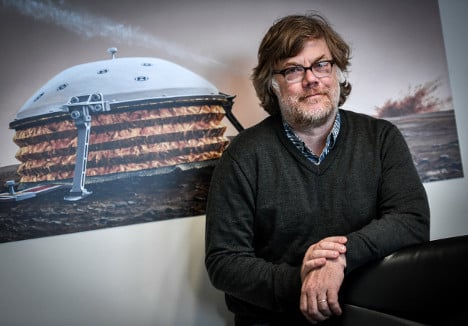 With a little luck and some help from NASA, the instrument he designed to take the Red Planet's pulse will land before the year's end and press a high-tech ear to its dusty surface.

As principal investigator for the Seismic Experiment for Interior Structure (SEIS), a multi-sensor seismometer, Lognonne will have a front-row seat for the scheduled launch on Saturday from Vandenberg Air Force Base in central California of NASA's InSight mission.

But he's keeping the champagne corked: three times in the past, Mars space missions featuring his ultra-sensitive seismometers have faltered, failed or been scrapped.

Lognonne's cherubic features are framed by a mop of shoulder-length auburn hair, a grizzled beard and white sideburns.

He has just turned 55, and has a weakness for Hawaiian shirts.

A researcher at the Institute of Earth Physics in Paris, Lognonne has explored the dynamics of tsunamis and deciphered data from 1970s Apollo missions.

But from the start, his true passion and unwavering mission was to build the tools that could detect what's going on under Mars' red surface.

“This planet was habitable four billion years ago, and I want to understand why, bit by bit, it stopped being so,” Lognonne said in an interview at the Paris university where he teaches.

Soon after completing his PhD in 1989, the young scientist focused on designing a suite of seismometers — used on Earth to detect and measure earthquakes — that could probe deep beneath the Martian surface in search of answers.

His first crack at securing passage to Mars for his instruments came in 1996, when France's National Centre for Space Studies joined a Russian mission that included an orbiter and two landers.

But two small seismometers on board never made it past Earth's atmosphere — the launch failed, and the mission was aborted.

Lognonne got another shot at his goal seven years later. Working with US engineer Bruce Banerdt — who 15 years later would become the scientific director for InSight — he helped prepare instruments for the European NetLander mission, which sought to set up a network of four small stations on the surface of Mars, including a seismometer. A launch date was set for 2005.

But the mission got mired in red ink and was axed in 2003.

“That was a bit of let-down,” Lognonne said flatly. What kept him going? Why didn't he give up at that point?

“I've always told my students, if you really believe that a project is scientifically important, the only reason to not carry on is if someone else is already doing it,” he said.

Banerdt and Lognonne went their separate ways but stayed in touch, linked in part by the dream of putting a seismometer on Mars.

“We knew that the scientific consensus was that it must be done,” Lognonne said.

In 2012, NASA invited bids under its Discovery programme for relatively low-budget space exploration projects, and the duo decided to try once again.

They were up against 26 other projects in their category.

In August of that year, they got the call from NASA saying they had been selected for a 2016 Mars launch.

“Four years is very short!” Lognonne recalls thinking, as they threw themselves into the task.

The SEIS seismometer that will — with any luck at all — leave Earth on Saturday measures ground motions in a wide range of frequencies, using an array of six sensors.

It will detect and record “marsquakes” and other sources of ground motion, such as meteorite impacts and the faint gravitational effects of Phobos, a Martian moon.

The sensors are in a temperature-controlled and vacuum-sealed box housed within a domed, three-legged pod that resembles an autonomous vacuum cleaner.

The ensemble — protected by a wind and thermal shield — is to be placed on Martian soil by a robot arm, and is connected to the lander by a flexible tether with power and data lines.

But three months before the scheduled launch in early 2016, the French team detected a tiny leak in the tether.

NASA canned the launch. “That was a shock,” said Lognonne.

But this time the cancellation was not final. The mission was rescheduled for May to June 2018, the next window of opportunity for a Mars launch.

The champagne is on ice.