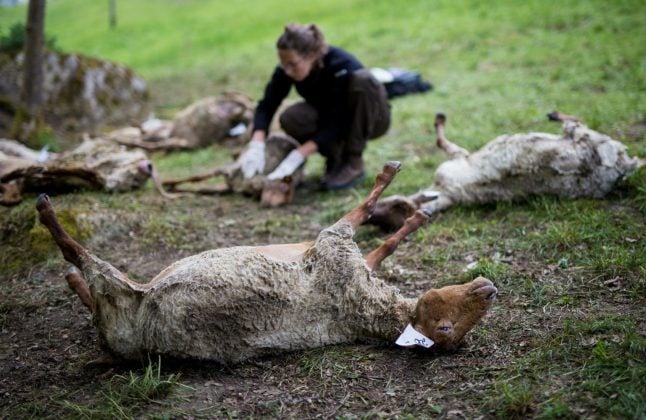 The aftermath of the attack in Bad Wildbad. Photo: DPA

Some of the sheep died due to their injuries after the wolf savaged them, others are believed to have drowned when they fled in panic and fell into a nearby stream.

According to local authorities, the wolf found its way into the animals' enclosure via a river and then savaged 32 of them. DNA tests are still being carried out which will provide absolute certainty on whether a wolf was responsible for the attack.

Wolves have been spreading ever further into Germany, since first appearing in the east of the country at the beginning of the century.

While the reappearance of the wolf after a break for 100 years has delighted animal rights activists, it has caused concern for farmers. In 2016 some 1,000 farm animals were killed or injured in wolf attacks.

At least seven wolves have been spotted in Baden-Württemberg over the past seven years.

If the most recent attack is confirmed as being lupine, the shepherd to whom the sheep belonged can expect speedy compensation.

“It was a horrible sight to behold,” said Anette Wohlfarth, head of the state organization for sheep protection. Wohlfarth said the alleged attack confirmed her suspicion that it would be difficult for wolves to live on the same territory as sheep in the rural areas of Baden-Württemberg.

The incident led the Federal Agriculture Minister Julia Klöckner to call for an effective means of managing the wolves and for more to be done to track their population growth.

Christian Democrats (CDU) in Baden-Württemberg called on Tuesday for the wolf responsible for the attack to be shot.

“In this individual case we believe it to be necessary that the wolf be shot, as it acted out of blood lust,” said Paul Nemeth, a spokesman for the CDU on environmental issues.

Wolves are protected under European law and can only be shot in circumstances when they are proved to pose an acute danger to local livestock.

“The first thing that needs to happen is that the shepherd is fully compensated,” said Johannes Enssle of the Nature Conservation Union of Germany (NABU).

READ MORE: What to know about the growing wolf population debate in Germany