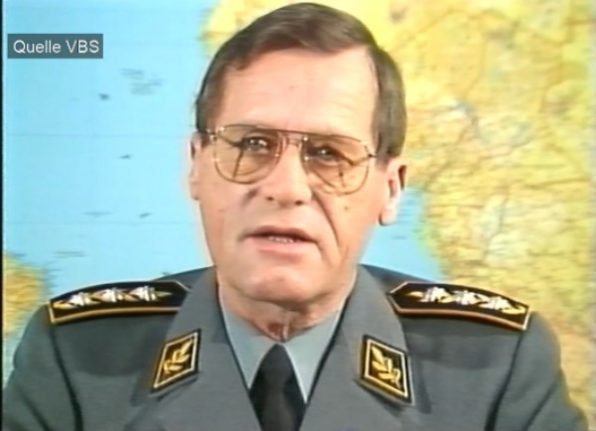 The files and dossiers containing information on possible links between Project 26 (P26) and other “stay at home” anti-communist organisations across Europe made national headlines in February after it emerged no copies could be located in the national archives.

Defence minister Guy Parmelin said at that time his ministry’s archives would be thoroughly searched in case copies were stored there.

Now, however, the defence department and the army have given up the hunt for the documents.

“We have transferred all of our files to the national archives. We didn’t find any further documents,” a department spokesperson told national broadcaster SRF on Saturday.

A recent documentary on the P26 made by national broadcaster RTS [in French].

A parliamentary committee is still continuing to search for the seven folders and 20 dossiers that made up part of the so-called Cornu report into a group that operated outside of government control.

That report – the result of an official inquiry after the group’s existence was uncovered in 1991 – determined P26 was not part of a Europe-wide network of anti-communist organisations.

Although the report will remain classified until 2041, its overall conclusions were already known through a brief executive summary published in 1991.

But some historians and politicians have expressed serious concerns over the missing files believing they may have been deliberately destroyed.

“It could well be that these files [include details] of actions against domestic targets and people would rather not know about that now,” said former national councillor Josef Lang in February. He has long pushed for the full Cornu report to be made public.

Redacted version of the report made public

In a surprise move, a heavily-redacted version of the 1991 report was published by the Swiss government last week, some 27 years after it was initially slated for general release. It provided new details on the links between P26 and the British secret service, including details of sabotage training provided by UK secret services to members of the group.

But the names of many of those involved were blacked out, ostensibly to protect the right to personal privacy of people still living.

Speaking to Swiss news site Watson recently, Lang said he was in agreement with the general consensus that no great surprises were hiding behind the blacked-out names.

But he also said it was unfortunate that their existence in the document would probably give rise to new conspiracy theories and criticised the secretiveness of the Swiss government, noting that by publishing a heavily redacted version of the Cornu report, the executive was actually doing more to protect foreign secret services than those foreign secret services themselves.

He referenced the Italian parliament’s two extensive reports into that country’s Operation Gladio, a “stay-behind” NATO organisation aimed at organising resistance in the event of a Soviet attack.

The P26 was disbanded in 1992. It contained some 400 members at that time, although its membership was as high as 800 during its peak.