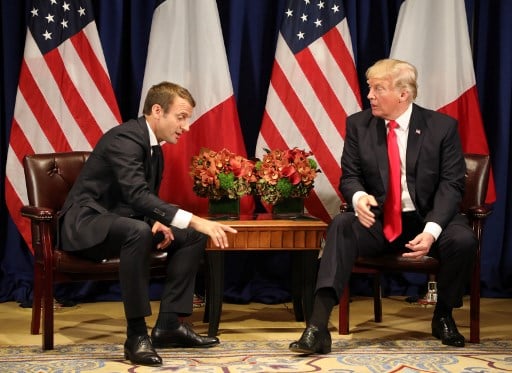 Iran is set to top the agenda throughout the visit. Photo: Ludovic Marin/AFP

In an interview broadcast on the eve of his departure, Macron rehearsed the arguments he will likely put to the US leader on America's trade fights, the Syrian conflict, and the imperiled nuclear deal with Tehran that Trump is threatening to quit.

But as the first state visit of the Trump era kicks off Monday, such thorny issues will be on the back burner — with the warm ties between the 40-year-old French leader and his American host instead on full display.

Less than a year after they shared an intimate meal on the second floor of the Eiffel Tower, Trump and First Lady Melania will host Brigitte and Emmanuel Macron for a private dinner at Mount Vernon, the home of the first US president George Washington.

The serious business kicks in Tuesday with meetings at the White House followed by a state dinner, and on Wednesday the centrist leader will demonstrate his English-language skills — a rarity for a French president — in an address to a joint session of Congress.

Iran is set to top the agenda throughout the visit: Trump has set a May 12 deadline for the Europeans to “fix” the 2015 agreement that curbs Tehran's nuclear program in exchange for sanctions relief, threatening otherwise to walk away.

The text cannot be unilaterally reopened, and Iran says it is ready to relaunch its nuclear program — which the West suspects is designed to produce a bomb — if it fails.

Macron, who has emerged as Trump's privileged European partner, is urging him on behalf of the Old Continent not to kill the deal.

“I don't have any Plan B for nuclear — against Iran,” Macron told the “Fox News Sunday” television talkshow before heading to Washington, arguing that curbing Tehran's missile program and containing its regional influence could be accomplished in addition to the 2015 accord.

Macron also cited the shared goal of reining in Iran as he argued for a long-term US commitment in Syria — where Paris and Washington have cooperated in fighting the Islamic State group and coordinated strikes on Syrian regime chemical weapons installations.

“I think the US role is very important to play,” he said. “Why? I will be very blunt. The day we will have finished this war against ISIS, if we leave, definitely and totally, even from a political point of view, we will leave the floor to the Iranian regime, Bashar al-Assad and these guys.”

Finally on trade — the other burning issue on the table — Macron will reiterate Europe's demand that it be definitively spared from punishing new steel and aluminum tariffs, days before a temporary exemption is due to expire.

“You don't make trade war with your allies,” he told Fox News.

'Now, we will work together'

Both countries are keen to emphasize their historic relationship — recalling that France was the first ally of American revolutionaries fighting for independence.

Macron will bring with him an oak sapling to be planted at the White House as a symbol of friendship.

It comes from near the site of the Battle of Belleau Wood in northern France, where 2,000 US Marines perished at the end of World War I.

On a personal level, despite sharp differences in political background, age and lifestyle, the presidents seem to have struck up a bond as fellow outsiders who outwitted the establishment to gain power.

“We have a very special relationship because both of us are probably the maverick of the systems on both sides,”Macron told Fox News.

Trump himself told Macron their “friendship” was “unbreakable” during his trip to Paris last July.

When asked about their first encounter — a much-scrutinized six-second handshake during a NATO summit in May –Macron acknowledged it had was a “very direct, lucid moment” that had set the tone between them.”

And a very friendly moment,” he added. “It was to say now, we will work together.”