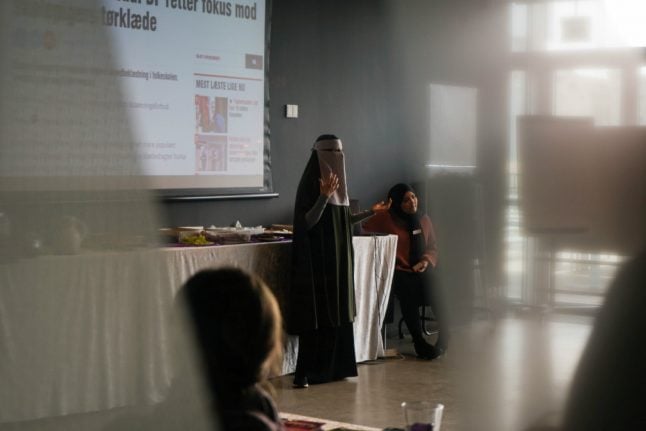 A woman from the Kvinder i Dialog group speaks at Aarhus' Dokk1 library on April 22nd. Photo: Farah Bahgat

In a conference room in Dokk1, Aarhus’ flagship public library, dozens of women in niqab on Sunday gathered to speak about and against a proposed law which is likely to ban their attire.

The Danish parliament is currently discussing a proposed law to ban public wearing of face-covering garments, such as the Islamic burqa and niqab.

The group Kvinder i Dialog (Women in Dialogue) welcomed attendees with information brochures about Islamic teachings, and a clothes rack with a few niqab dresses, under a sign that read “try a niqab”. A sign offering attendees the chance to “try a niqab”. Photo: Farah Bahgat

Niqabs have a slit through which the wearer's eyes can be seen, while burqas cover the face entirely, with the wearer seeing through a mesh in the material.

After the government formally proposed the ban on face-covering garments this February, a group of women in Copenhagen – who count both wearers and non-wearers of the niqab amongst their number — formed the initiative, leading to Sunday's event in Aarhus.

The group hopes to speak to people about Islam and the niqab and to challenge prejudices against them, one member, Maria, who wished to withhold her full name, told The Local.

Reactions to the group’s activities have varied.

“People didn’t think we had a voice, people thought we were suppressed so I think people were really surprised to see that we have organised ourselves,” Maria said.

“We’re against the ban because we live in Denmark and we believe that everybody should have the free choice and decide themselves what they want to wear. We want to be allowed to wear the niqab and practice our religion. [The proposed law] is against the constitution in Denmark, so we’re trying to fight that,” she added.

Denmark’s constitution states that “The citizens shall be entitled to form congregations for the worship of God in a manner consistent with their convictions, provided that nothing at variance with good morals or public order shall be taught or done.”

Maria said that the group does not only target the public, but has also reached out to politicians. Left-wing parties have expressed support for the group, she said.

However, not all politicians are easy to contact as a niqabi woman. According to Maria, right-wing parties have declined to meet with the group unless they take off their veils. Instead, the group tries to communicate with these parties over the phone.

Minister of Justice Søren Pape Poulsen has previously said in reference to the niqab that it is “incompatible with the values in Danish society and disrespectful to the community to keep one's face hidden when meeting each other in public spaces.”

“A lot of people look [at me] differently, and I think that is fine, I don’t have a problem with that. And some people ask questions, a lot of children ask curious questions,” Maria said about her experience as a woman who dresses in niqab.

“Thank God I have not experienced any physical abuse, but I have experienced a lot of verbal abuse, and it is probably every time I am out by myself it happens at least once. but If I am with my sisters or with my husband nobody harasses me,” she added. The proposed law, which was presented to parliament for the first time last week, is expected to be passed, with support from the opposition Social Democrats providing a majority.

“Because I have children and I don’t want to get into problems I will remove my veil – sadly – I really don’t want [to],” Maria said.

“I am not afraid of the fines by the police, but I am more afraid of the people on the street who believe they can enforce the law,” she added.

Poulsen said last week that police will not force women to remove burqas in public, but would issue fines or ask wearers to go home.

Maria said her dialogue group will maintain its conversation should the ban be passed.

“We believe if the majority of citizens in Denmark are against this law, maybe we will have a chance to reverse it,” she added.