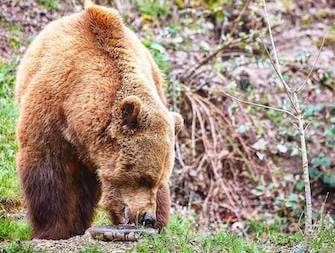 One of the bears enjoying the special treat. Photo: Kursaal Bern Facebook page

Bears love the sweet stuff, and the three residents of Bern’s bear park – Finn, Björk and Ursina – are no exception.

Since emerging from their winter sleep the three are now being treated to honey produced by bees kept at the upmarket Kursaal hotel and conference centre, according to its Facebook page.

Some 300,000 busy bees have been producing the golden nectar for the past year on the hotel’s extensive terrace overlooking central Bern.

While most will be consumed by hotel guests, around 10 kilos of honey has been donated to the park, 20 Minuten reported.

“The bears love honey more than anything,” it quoted bear park head Peter Schlup as saying.

He said the sweet treat was being hidden in various places around the park which adjoins the Aare river.

“Honey is mainly used as a reward for our bears.

“It doesn’t take them long to sniff it out, and then it’s gone in a flash,” said Schlup.