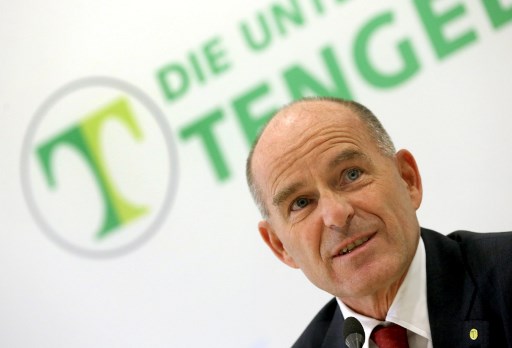 “After more than seven days in the extreme weather conditions of a glacier region, there is no longer any hope of survival for Karl-Erivan Haub,” said the group in a statement issued on behalf of the magnate's family.

It added that a multi-national search for the magnate had been called off.

Haub is the boss of Germany's sprawling Tengelmann retail group, which owns a number of chains and other businesses, including the Kik low-cost clothing stores and OBI home improvement outlets.

Its success has lifted the family into 265th place on Forbes magazine's global rich list, and 20th place in Germany.

Haub, a seasoned alpinist, had gone skiing solo but the alarm was raised when he did not show up for an appointment at his hotel in Zermatt.

Swiss and Italian search and rescue teams have been combing the region around Switzerland's iconic Matterhorn peak.

Swiss media reported that Haub had taken the ski lift at the Klein Matterhorn on Saturday at around 8:30 am, and had set off at an altitude of 3,800 metres (12,470 feet) on the glacier-covered mountain – the highest in Europe reachable by cable car.

Haub was training for the Patrouille des Glaciers, a gruelling race across the Alps organized by the Swiss army and due to take place on April 17th.

But rescuers believe that he had an accident during the solo run.

Tengelmann said efforts would be made to recover Haub's body for burial and that his family would bear all costs towards the search.

“This misfortune is a terrible and unbelievable tragedy for the Haub family as well as for the whole company,” said Tengelmann group spokeswoman Sieglinde Schuchardt.