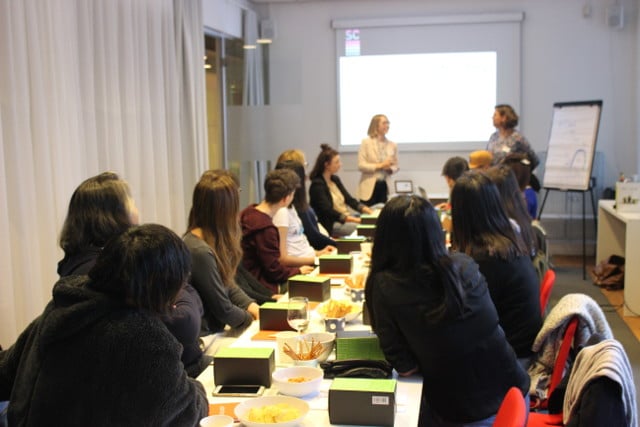 Day one of the course. Photo: SmartCoding

SmartCoding wants to promote gender equality in IT by giving women the chance to learn programming free of charge, helping them from the early stages of learning through to securing internships.

The idea was inspired by personal frustration on behalf of the founders over how difficult it can be to get started in programming in Sweden as an international woman.

“One of our co-founders who isn't a Swede and doesn't speak Swedish fluently had been trying to change career and become a programmer. She could only find courses in Swedish and also some were expensive, others short-term. There was a lack of proper information, so she started to think about whether there's a way to make this career change happen easier for other women,” SmartCoding co-founder Despina Stamkou explained to The Local.

“I was a programmer for over 15 years, and I have a lot of technical knowledge. We sat down one day and thought about how we could fix the problem. There are a lot of people who want to learn but couldn't afford to pay for education, or they are newcomers or refugees and do not speak Swedish yet. So why don't we train these people for free? We have the knowledge, we know what it takes to learn to program and we can guide them,” she added.

MORE ON GENDER EQUALITY IN SWEDEN:

Stamkou noted that there is “still a gender gap in IT in Sweden like everywhere else”. In order to make a meaningful impact the course goes beyond teaching participants programming itself, also helps to guide them towards their favoured niche then places them in a paid three-month internship with partner companies. The course is open to anyone with a Swedish personal number (personnummer) and the right to live and work here, provided they have good English skills. Participants in the pilot course were selected after a math and logic test followed by interviews.

Stamkou thinks that one of the keys to helping more women succeed in IT is making sure they stay motivated despite the difficult environment:

“We're bringing in a lot of guest lecturers to support the course participants. Other women who have been through this process will motivate participants to continue learning, because there's a lot of fear about programming, especially once you are a woman with no experience in IT. That's one reason why there's a huge gender gap.”

If the company can secure more sponsors to help pay for the largely self-funded scheme the long-term goal is to take it beyond Stockholm. The co-founder thinks more initiatives to help women get into programming could only be a good thing.

“If you have equality, you have diversity and diversity is needed. Different opinions and perspectives are only helpful. More initiatives would definitely be helpful, and our vision is to expand outside Stockholm then later outside Sweden, into the Nordics and further into Europe and beyond,” Stamkou concluded.