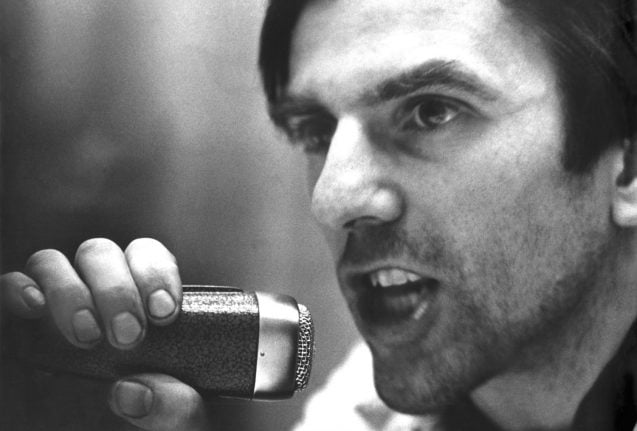 Half a century ago on Wednesday, Dutschke was one his bike cycling down the the Kurfüstendamm, West Berlin’s famous shopping mile, on his was to the pharmacy to pick up cough drops for his infant son.

But he stopped when a slight young man approached him and asked if he was Rudi Dustchke. When he replied that he was, the man pulled out a revolver and shot him three times – twice in the head and once in the shoulder.

After hours of surgery, Dutschke survived. But he would not be able to speak again for three years. Eleven years later he died in the bathtub on Christmas Eve after suffering a seizure related to his brain injuries.
The shooter, 23-year-old Josef Bachmann, had pictures of Hitler hanging on his bedroom walls and was trained with weapons by neo-Nazis. He later killed himself in jail.

The incident was one of the defining moments of post-War German history, contributing to the radicalization of the 1968 student movement and leaving a black mark over the name of Germany's largest newspaper group, Axel Springer, which owns the tabloid Bild and the conservative daily Die Welt. Born in East Germany in 1940, Dutschke grew up in a protestant family which “never saw a contradiction between Christianity and socialism,” as he later wrote.

He soon proved himself to be an uncomfortable figure for East German authorities though, declaring his support for German reunification and refusing to be conscripted. Banned from studying sports journalism, he went to West Berlin in 1960 to study sociology and found himself trapped in the democratic enclave by the erection of the Berlin Wall a year later.

He remained a vocal proponent of socialism and dedicated himself to becoming a “professional revolutionary.” As a leading figure in the Socialist German Student Union, he decried what he saw as the injustice of capitalism and the imperial policies of the US in Vietnam.

In February of 1968 he told a crowd of enraptured students at the International Vietnam Congress in Berlin that “it is the duty of every revolutionary to carry out the revolution.” Spiegel was just the largest German magazine to name him the face of the revolution, printing his face on its front page.

Dutschke was calling for revolution in a country in which almost half of Germans still insisted that Nazism was in principle a good idea, according to a representative survey from the time. But he was also calling for a break with the USA at a time when West Germany – and West Berlin in particular – was heavily dependent on American military support.

For the pro-American Bild newspaper, he became a figure of loathing, earning comparisons on its pages with Hitler and Napoleon.

Most infamously, Bild told its readers in early 1968 that ‘“all of the dirty work [of tackling the revolutionaries] shouldn’t be left to the police and their water cannons.”

Tens of thousands of “upright Germans” listened to a call to arms by Bild and marched through Berlin carrying placards describing Dutschke as “public enemy number one.”

The student movement themselves were hardly angels, though. Just days before the attack on Dutschke, left-wing radicals who later went on to create the RAF terror group bombed a shopping centre in Frankfurt, saying they would keep up their campaign against capitalism until people stopped consuming. As news spread of the shooting on Dutschke, it didn’t take long for the student movement to turn on Bild, saying that “Bild shot too”. That evening students marched on the Axel Springer building in Berlin's Koch Straße and threw Molotov cocktails through the windows.

In the following days street battles swept across the country, hitting Frankfurt, Hamburg, Cologne and several other major cities. Tens of thousands of students took to the streets and were met by 22,00 police officers with water guns.

Two people were killed in the ensuing chaos and hundreds more were injured. In Munich students raided an Axel Springer building and ransacked the offices.

“He had called people to the tough and lengthy march into the corridors of power through which he was preparing the greatest success of this movement,” he said, referring to Dutschke's call for students to involve themselves in politics.

But with the assassination attempt “the student movement lost the exhilaration and ease that it had at the beginning,” he wrote.

These days, the newspapers of the Axel Springer group concede that their reporting of events went too far.

“Bild and Welt did indeed report on the West Berlin student movement in increasingly harsh tones,” Die Welt recently conceded. “Often the boundaries of good taste were broken, and defamation and inflammatory slogans were mixed into the articles.”

Half a century later it is hard to say whether Dutschke or the Axel Springer newspapers had the last word on the 1968 student protests.

But, in a sign that the students did eventually get the upper hand – achieving cultural supremacy on minority rights, environmental issues and sexual liberation – one conservative politician called this year for a “conservative revolution” against the 1968 generation.

And the Axel Springer newspapers have to live with the legacy of their campaign against Dutschke in one other way too. In 2008, Koch Straße – where the media giant still has its headquarters – was renamed Rudi Dutschke Straße.