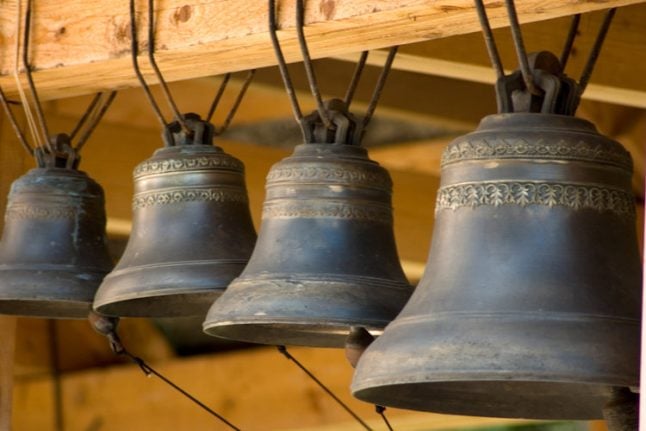 Last year, the town of Wädenswil on Lake Zurich made national headlines when a married couple officially complained they couldn’t sleep because of the constant tolling of church bells during the night.

Courts in Zurich agreed with them, ruling that the bells should at the town’s evangelic reformed church should only be rung on the hour at night, rather than every 15 minutes.

But the Swiss federal court then overturned the ruling, arguing less frequent bells at night made little difference to noise pollution levels and that this ringing of church bells was a local tradition.

Now a similar sleep-centred dispute is simmering away in Hofstetten in the canton of Solothurn, Swiss daily the NZZ reports.

When several residents in the town called on the St. Nikolaus Catholic Church to shift its six-minute long call to mass from 6.30am to 7am so they could get an extra half an hour sleep, they met with stiff resistance.

Locals came in huge numbers to a church meeting and voted against the planned move, apparently laying the matter to rest.

But ecclesiastical municipality president Linus Grossheutschi thinks he may have found a compromise: quieter bells. And with the four bells of the church set for restoration, he believes now is a good time to explore the options.

Switzerland, we're going to have to sit down some time and talk about THESE GODDAMN INCESSANT CHURCH BELLS.

One of those involves the possible use of new, quieter bell clappers – as the hammers that hit the inside of the bell and create the ringing sound are known.

There is a new generation of hi-tech bell clappers that make measurably less noise, René Spielmann with the Glockengiesserei Rüetschi bell company in the Swiss canton of Aarau told the NZZ.

But Spielmann said “bells are equivalent to strings on a violin”. All sorts of other factors play a role, and every church is different. The lower a church tower is, and the larger the opening through which noise of the bells can emerge, the more chance there is that someone will be disturbed by the noise.

In the case of the church in Hofstetten, prospects are good and it may well turn out that with a bit of Swiss ingenuity, locals may get that extra sleep after all.