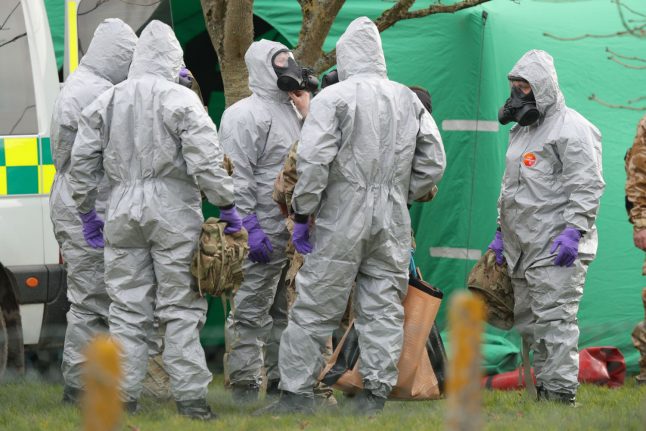 After former Russian intelligence officer Sergei Skripal was attacked with a nerve agent last month on British soil, London soon pointed the finger at Moscow. British Prime Minister Theresa May announced that it was “highly likely” the attack originated from Russia and promptly expelled 23 Russian diplomats from the UK.

But the German public has been harder to convince.

A survey published by Tagesspiegel at the end of March showed that 30 percent of Germans thought the German response was “clearly excessive”, while a further 21 percent described it as “rather excessive.”

Conversely just 15 percent of respondents said the expulsions – small by comparison with those carried out by the UK and the US – were rather or clearly restrained.

Josef Janning, a leading foreign policy expert at the European Council on Foreign Relations (ECFR), told The Local that Germans are not naive to the foreign policy antics of Moscow.

“I would expect that the German public find it quite possible that the Russians are behind the Skripal attack,” he said.

“But Germans have a bit of a guilt complex when it comes to Russia – they are still aware that Russia paid a heavy price because of Germany in the Second World War.”

This added to a general feeling that Russia “hasn’t been dealt with too cleverly” since the end of the Cold War means Germans are prone to try and pacify Moscow rather than do anything that could further escalate tensions.

Janning adds that the German public has a long memory when it comes to claims by British public figures that they have proof about the illegal methods of foreign leaders.

“They have been influenced by the absolute certainty with which Tony Blair claimed that Iraq had weapons of mass destruction 15 years ago,” he says.

“Germans at large are very cautious when it comes to any kind of international (albeit only diplomatic) confrontation,” she says.

I would say that there is a certain naïveté when it comes to the harsh realities of international affairs. For most, the wish not to make things worse trumps the willingness to oppose the things they know are going wrong in Russia.

When British scientists who examined the nerve agent stated earlier this week that they could not definitely say where the agent originated from it was headline news in Germany, despite the Porton Down experts making clear that it was not their job to say where the agent was produced.

A lack of context to some of the German coverage has led to accusations that sections of the German media are spreading Russian propaganda and thus feeding general public scepticism about the British version of events.

But Janning points out that the broadsheet press in Germany has “generally had good coverage, which is balanced and conscious not to fall into the trap of spreading fake news.”

“Typical of the German coverage has been a call for Britain to do more to substantiate its claim [on Russian culpability].”

He also adds that there is general confusion in the German media as to why Britain has not accepted Russia’s request to become involved in the investigation into the attack on Skripal.

“The German media position is that you shouldn’t give Russia and easy point by allowing them to say that they were not allowed to check up on the evidence.”

According to von Bismarck some German commentators have cited Brexit as a reason for not wanting to back Britain.

“There are voices like the left-wing journalist Jakob Augstein who call Brexit their reason for why we should not back the UK over Skripal,” she says. “They claim that the British have chosen to desert the EU so there is no reason to help them. But that argument is just a convenient smokescreen. Brexit or not, Augstein would be in favour of cozying up to Putin rather than confronting him.”

A reliable partner in Berlin?

Populists on the right and left of the political divide in Germany have seized on the lack of a smoking gun in recent days to portray western governments as the aggressors in the Skripal affair.

“There is no proof that Russia was behind the attempted murder of Skripal,” Alexander Gauland, leader of the far-right Alternative for Germany, said on Wednesday.

“That means that it was hasty and unwise to expel Russian diplomats and take other political measures against Russia,” he said.

Die Linke (The Left Party) have described the official German position as “the opposite of a responsible foreign policy.”

“This extremely dangerous and misplaced strategy of escalation must urgently be ended. It is leading to a new Cold War and puts our security at risk,” said Die Linke MP Sevim Dagdelen.

Von Bismarck points out though that “there are also several senior figures in the mainstream parties who have called for a “rapprochement” with Russia. Not to mention the prominent retired SPD politicians like [Gerhard] Schröder and [Matthias] Platzeck who are paid-up lobbyists for Putin‘s Russia.”

But Janning is clear in his belief that the populist fringes will have no impact on German government policy.

“No one needs to be afraid that they will give in to the voices of the AfD and Die Linke,” he says, before adding that the German expulsion of Russian diplomats “should not be overread as Germany giving a carte blanche to the British government to do what it wants.”

Based on the current evidence Britain has provided about Russian culpability “Berlin will not cover for additional British action,” he says.

As the world gears up to ring in the New Year this weekend, Putin sent congratulatory messages to the leaders of Kremlin-friendly countries including Turkey, Syria, Venezuela and China.

But Putin will not wish a happy New Year to the leaders of the United States, France and Germany, countries that have piled unprecedented sanctions on Moscow over Putin’s assault on Ukraine.

“We currently have no contact with them,” Kremlin spokesman Dmitry Peskov told reporters.

“And the president will not congratulate them given the unfriendly actions that they are taking on a continuous basis,” he added.

Putin shocked the world by sending troops to pro-Western Ukraine on February 24.

While Kyiv’s Western allies refused to send troops to Ukraine, they have been supplying the ex-Soviet country with weapons in a show of support that has seen Moscow suffer humiliating setbacks on the battlefield.