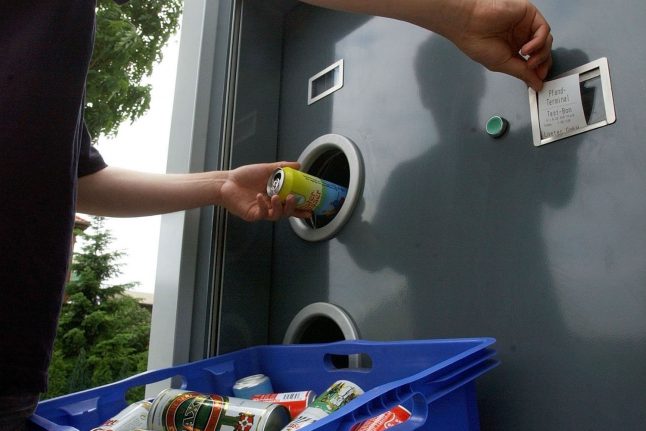 Artur K. faces a court in Bochum this week, after he was accused of defrauding the German Deposit Society (DPG) out of of €1.2 million.

The 27-year-old shop manager is said to have illegally manipulated two bottle deposit machines in his shop.

Deposit machines allow customers to return empty bottles and cans, and claim back a small amount of money from their purchase. When a bottle is inserted, the machine crushes and records the item.

The vendors are then able to claim back money from providers, based on the the data stored in the machine.

Artur K. is accused of manipulating the machines into not crushing the bottles, allowing him to retrieve and insert the same bottle multiple times, Der Westen reported.

This allowed him to claim significantly higher sums than he would otherwise have been able to from the DPG.

If he is found guilty, he could face up to 15 years in prison.

The shooting happened at the Lloyd Gymnasium school in the centre of Bremerhaven, a city on Germany’s North Sea coast, on Thursday morning.

“The armed person has been arrested and is in police custody,” police said in a statement. The injured person was not a pupil, police said, adding that the person been taken to hospital.

“Students are in their classrooms with their teachers. The police have the situation on the ground under control,” the statement added.

Bremerhaven police tweeted that a large deployment was under way in the city centre and asked residents to avoid the Mayor-Martin-Donandt square and surrounding streets, in the vicinity of the Lloyd secondary school.

Local news site Nord24 said the person injured on Thursday was a woman who worked at the school.

They said a school pupil heard shots being fired and called the police. Pupils reportedly barricaded themselves in their classrooms.

Police launched a large-scale operation and cordoned off the area around the school while they carried out inquiries.

Authorities set up a phone hotline for concerned parents. Many parents gathered in front of the school after being alerted by their children, local media reported.

In a separate incident on Thursday, police in the eastern city of Leipzig said they had detained a 21-year-old student still at secondary school after being tipped off by Snapchat that he had posted pictures of himself with a gun and made unspecified threats.

A police spokesman said that the 21-year-old did not pose a real threat, however, and only possessed an airsoft gun, a replica firearm that uses non-lethal, usually plastic, pellets.

School shootings are relatively rare in Germany, a country with some of the strictest gun laws in Europe. But a recent spate has rattled the population.

Last week, investigators in Germany’s city of Essen said they foiled a school bomb assault, as they arrested a 16-year-old who is suspected to have been planning a “Nazi terror attack”.

Police in Essen stormed the teen’s room overnight, taking him into custody and uncovering 16 “pipe bombs”, as well as anti-Semitic and anti-Muslim material.

In January, an 18-year-old student opened fire in a lecture hall at Heidelberg University in southwestern Germany, killing a young woman and
injuring three others before fleeing the scene and turning the weapon on himself.

In 2009, a former pupil killed nine students, three teachers and three passers-by in a school shooting at Winnenden, in the German state of Baden-Württemberg. The gunman then killed himself.

In 2002, a 19-year-old former student, apparently in revenge for having been expelled, shot dead 16 people including 12 teachers and two students at a school in the central German city of Erfurt. He too then killed himself.

The Winnenden and Erfurt massacres were carried out with legal weapons and spurred Germany to tighten gun laws.

The country currently requires anyone under 25 to pass a psychiatric exam before applying for a gun licence.