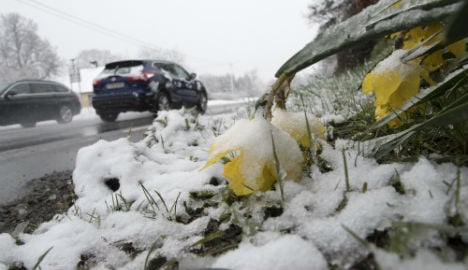 Spring flowers trying to break through. Photo: Johan Nilsson/TT
On March 1st, a weather station in the village measured temperatures of -37.1C, the coldest ever recorded there.
For Sweden as a whole, March was colder than average, but not exceptional, with colder months recorded in both 2006 and 2013, according to preliminary figures from state weather forecaster SMHI.
“It's 1C to 4C below the average temperature for March,” Marcus Sjöstedt, a meteorologist for SMHI told The Local.
It wasn't just Särna that saw extreme cold. Tärnaby, near the Lapland ski resort of Hemavan, also recorded one of its coldest March months ever.
“Excluding what’s still to come, March this year is likely to  be the fifth coldest ever observed after 1962, 1940, 1958 and 1947,” the forecaster said of the station.
But spring may finally be on its way, albeit too late for Easter.
“The trend is for it to become milder by the middle or end of next week,” Olav Krogsäter at StormGeo in Oslo told the Dagens Nyheter newspaper. “Spring will probably come at last.”
The deepest snow level was the 166cm recorded at Kittelfjäll in the mountains of southern Lapland, although further snowfall over the Easter weekend in Jämtland could see it knocked off its pedestal.
Outside Sweden’s mountain region, the deepest snow was seen in Gåltjärn i Ångermanland, with 159cm recorded.
The rare combination of unusual warmth over the Arctic and unusual cold in northern Europe led to a strange situation where Karesuando at the very northern tip of Arctic Sweden was at one point the only place in the entire country where the temperature was above freezing, with the needle hovering at 0.2C.