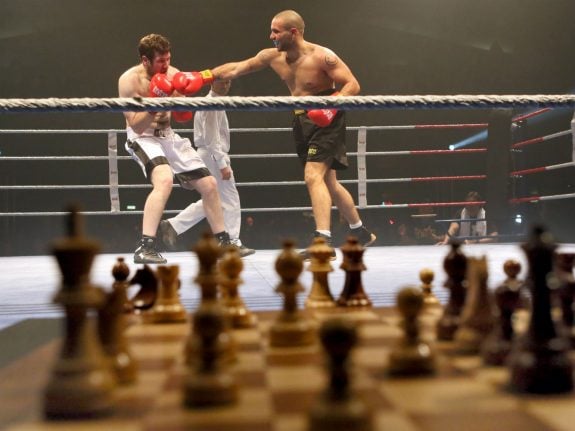 Two opponants at the World Chessboxing Championship in Berlin in 2014. Photo: DPA

With his dental guard still in his mouth and a slightly queasy feeling in his gut, a shirtless Thomas Cazeneuve was exuberant after checkmating his opponent during a chess boxing bout in Berlin, the world capital of the unusual sport.

Just as deft in the movement of his rooks as with his fists, Cazeneuve claimed victory against his Ukrainian challenger after seven alternating rounds of boxing and chess.

The match played out before a crowd of curious onlookers drawn to the spectacle of the so-called “Intellectual Fight Club”.

Today, Rubingh has set his sights on introducing chess boxing to the Olympics and even looking at sending robots into battle, as the multidisciplinary sport gains popularity.

The rules of chess boxing are simple.

Three minutes of gentlemanly chess played on a board in the ring is alternated with three-minute bouts of intense boxing over 11 rounds – six of chess, five of boxing.

The winner has to earn either a boxing knockout or a checkmate on the chessboard, but either chess boxer can be disqualified for taking too long to make a chess move or by breaking the boxing rules.

“You need to be good in both disciplines, which can be quite complicated. But it's true that one mustn't be afraid of being punched,” said Rubingh.

The biggest difficulty may be staying lucid to pull off the winning chess move despite the physical demands of boxing.

“It was my toughest fight with a rival who is a total all-rounder, and who has left me exhausted, especially in boxing,” said Cazeneuve, 24, a recruitment consultant.

“I held on thanks to my mental strength,” he added.

In fact, “60 percent of the winning moves are made on the chessboards and 40 percent in boxing,” said Rubingh, a 43-year-old Dutchman.

Recalling the sport's gestation, chess-lover Rubingh said that it began in 2002, when, after a round of chess that ended in stalemate, he suggested to a friend that they go for a boxing bout at a bar in Amsterdam.

“The idea was born, but we were sober,” he said. Berlin became the birthplace of chess boxing when a Chess Boxing Club was formed there in 2004.

“Combined, the two sports are the amalgamation of the most beautiful capacities of human beings to create a type of supreme being,” he said.

The author of the graphic novel, Bilal, told AFP that he found it “rather amusing that the idea that was potentially absurd had become reality”.

While it was considered more a curiosity than a real sport in the beginning, chess boxing has gained a strong following, including chess fans who have crossed over to the more physical realm of boxing.

Alina Rath, a 29-year-old German, has been a member of a chess club for 20 years but only began adding boxing to the mix in August.

“Chess boxing breaks down cliches of the rough guy who only knows how to beat up the weak intellectual,” said the accountant.

Although Rath says she feels “more like Kasparov than Tyson”, she said she was tempted to sign up for the dual discipline after five years of practice in mixed martial arts.

Some 3,500 people are card-carrying members of 11 federations in countries including Britain, Iran and Russia.

And it is Berlin that is the undisputed headquarters of the sport after the World Chess Boxing Organisation was set up there in 2004.

Regular exhibition games are organised, pitting players of all nationalities.

“Our aim this year is to create a professional league financed by investors and partners,” said Rubingh, who is pushing for the sport to be included in the Olympic Games in Paris in 2024.

To gain publicity for the sport, Rubingh has another seemingly space-aged idea up his sleeve.

This time, he is turning to science fiction guru Isaac Asimov for inspiration.

Taking a leaf from Asimov's series depicting man's fight against the machine, Rubingh wants robotic companies to partner him in organising a series of matches pitting men against robots.

“I would fight against a robot with artificial intelligence and which is much stronger than us in chess but also weaker in terms of reflexes,” he said.

“Every year, I would challenge the best of the robots and it would become increasingly difficult for me to win as they improve.

“The day that I lose, the machine will have overtaken mankind,” said Rubingh, who is dreaming of a million-dollar fight in New York's Times Square. 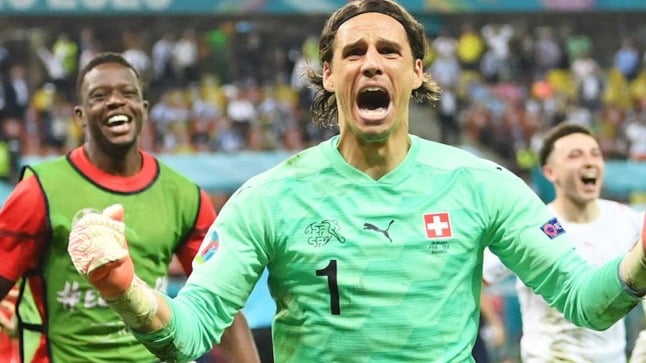