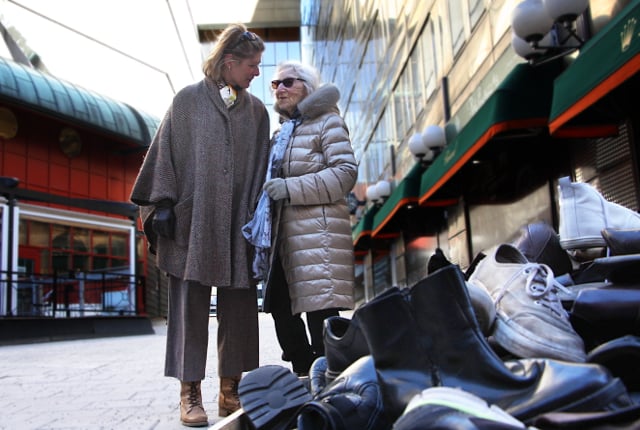 When Hédi Fried arrived at the Auschwitz concentration camp with her parents and sister in 1944, she and the other prisoners were made to undress and throw away their own shoes and clothes. Images of piles of the shoes of victims have since become a symbolic reminder of the horrors of the Holocaust.

She and Julie Lindahl – a granddaughter of an SS member in occupied Poland – have now helped to launch a new street art project which aims to encourage people to resist racial violence and white supremacy.

The art installation – a pile of old shoes next to the message #AndISpokeOut (or in its original Swedish, “och jag protesterade”) – has been set up on the street Drottninggatan in central Stockholm and outside the UN headquarters in New York to mark the International Day for the Elimination of Racism on March 21st. The shoes on Drottninggatan in Stockholm. Photo: Emma Löfgren/The Local

The Local was there when Fried and Lindahl added their shoes to the pile on Tuesday afternoon.

“It is very important that people understand that children of perpetrators and children of survivors have the same problems. Parents don't talk with their children about what they have been through because they don't want to upset the children, and the children understand that the parents don't want to talk. And they grow up in silence,” said Fried, speaking to Swedish newspaper DN and The Local in a café afterwards.

“We don't come from different sides. There is only one 'we' and everything else is a lie. In reality there is no 'us' and 'them'. To me that's the most important message,” said Lindahl, who was born in Brazil after the family left Germany in the 1960s and has since lived between several countries, including the US. A former blogger for The Local, she has also written about when she discovered the truth about her heritage.

Fried, today 93, came to Sweden after the war ended, married, trained as a psychologist and had three children. She continues her tireless work against racism and anti-Semitism to this day, and has recently written several articles voicing concern about rising extremism and neo-Nazi movements in Sweden.

“I am happy that I live in Sweden, because it almost seems like far-right extremism has come much, much further in other countries. And in a way I feel safe in Sweden because I see that the government is taking this seriously,” Fried nonetheless told The Local on Tuesday.

“I really hope that there will be no change to that humanism that Sweden has shown.”

Lindahl added: “Again, I want to talk about 'we'. The problems that Sweden faces are not just Sweden's problems – in some way all countries are battling similar issues. Sweden is part of the international community and has a number of challenges that have to be dealt with together with other countries.” Hédi Fried puts a pair of sneakers on the pile of shoes. Photo: Emma Löfgren/The Local

The “And I Spoke Out” protest was first created by Swedish organization 'Make Equal' at political festival Almedalen Week last summer. It was torn down by neo-Nazi group the Nordic Resistance Movement and was then rebuilt in several locations around Sweden.

Make Equal now hopes the #AndISpokeOur movement will continue to grow organically even without their involvement. Together with 29 other organizations, including the Raoul Wallenberg Academy, it urged people to join the global protest in an opinion piece published in Swedish newspaper Aftonbladet on Wednesday.

“We urge everyone to do what they can to contribute to conversations about democracy, openness and inclusion. Building a shoe installation is our way to remind people of the importance of protesting, but it is not the only way. We all have a responsibility to be on the right side of history,” they wrote.