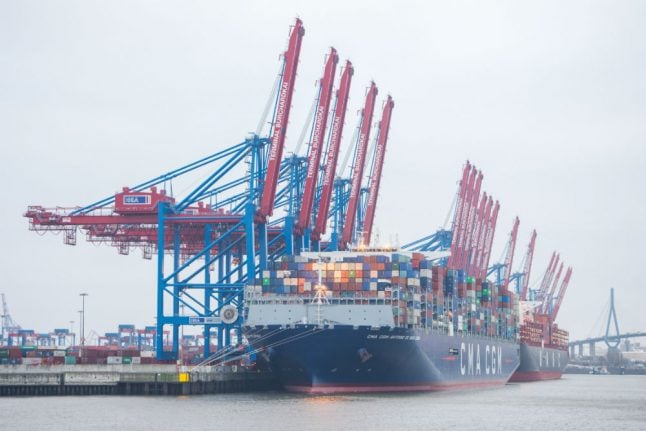 Never before has a freighter of this size been to Germany’s largest seaport.

With a maximum loading capacity of 20,776 containers, the “CMA CGM Antoine de Saint Exupéry” launched in 2018 is 400 metres long and 59 metres wide. The ship beats the previous record holder “Munich Maersk” with its 20,568 containers which arrived in Hamburg for the first time last August.

The CMA CGM Antoine de Saint Exupéry is moreover the second largest container ship in the world; only the six G-class sister ships that belong to shipping company OOCL are larger than it – each with a capacity of 21,413 containers.

The vessel is furthermore of particular importance for the Hanseatic city as French shipping company CMA CGM is the port of Hamburg’s largest customer.

When the freighter arrived in Hamburg early in the morning on Thursday, its huge size meant that four tugboats had to help it dock.

Around 67 employees have been working in shifts with the help of nine gantry cranes to get the big job done.

The arrival of the CMA CGM Antoine de Saint Exupéry falls into a historic year for Hamburg. Almost 50 years ago, on May 31st 1968, the first container ship docked in the city’s port, marking the beginning of the cargo ship revolution in Germany’s sea transport sector.