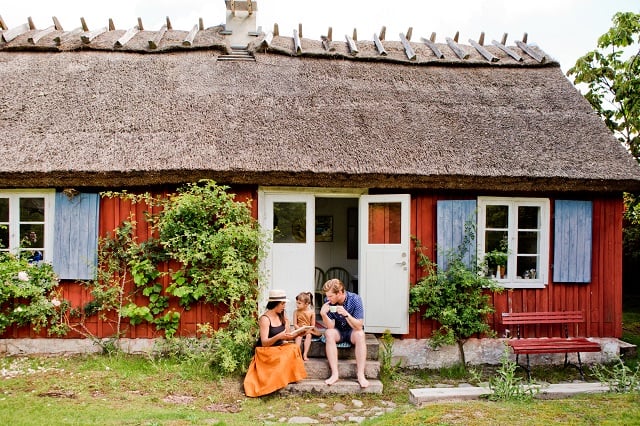 Moving to Sweden for love means seeing a new side of your partner, and battling bureaucracy and other barriers. Photo: Lina Roos/imagebank.sweden.se

Article first published on The Local in 2018.

Many of Sweden's foreign residents fall into this category, whether they make the move to join a Swedish partner they met abroad or as a 'trailing spouse', following a partner who's been offered a job in the Nordic country.

And if you're one of them, you'll probably find that everyone has an opinion on your decision. Some will claim it's romantic, others will warn you're making sacrifices or that the new location will change the dynamics of the relationship. The truth is a bit of both, so The Local spoke to people who have been through the process themselves, and come out the other side, to find out how to cope with the unexpected challenges of being a 'love immigrant'.

READ ALSO: What happens when you move across the world for love, then break up?

Perhaps the most obvious challenge is actually, physically making the move. Sweden offers visas to partners of Swedish citizens or permanent residents, and you don't need to be married to be eligible. You just need to prove your relationship and previous cohabitation abroad or plans to live together in Sweden. After an initial application, there's an online questionnaire, after which you take an in-person interview, usually at a Swedish embassy. Then, you wait. And wait.

“I suppose that we were a little naïve towards the whole process,” says Casey McCorry, an Australian teacher who moved to Malmö in summer 2017.

“We were told that the process can take an extremely long time and started hearing horror stories about couples being split up and waiting over a year for a decision to be made.” Casey and Eddy on their wedding day. Photo: Claudiu Olãneanu

Her husband Eddy initially joined her, travelling on a 90-day tourist visa and applying for a partner visa after arriving (McCorry has dual British nationality, meaning she didn't need a residence permit herself). Eddy had to go back to Australia in October after the tourist visa ran out, and it wasn't until December that they reached the next stage of the process, when they received a letter asking for proof of their relationship and cohabitation.

At that point they were also assigned a case worker at Sweden's Migration Agency, something McCorry says raised their hopes that approval of the visa wouldn't take much longer.

“We sent in everything that was requested of us and waited, only to hear nothing back. After several e-mails to the migration board, we finally heard from a new worker in early March, telling us that she had now been assigned to our case, and asked us all the same questions again,” she says. The couple filled out the forms, attaching copies of Facebook posts, photos and messages, flight and hotel bookings to prove the authenticity of their relationship.

“We try to be patient, but e-mails we send now are just met with 'it is in the process' and we are told it can take up to 18 months,” says McCorry.

As they approach the one-year mark, the couple feel they are no closer to a decision than when they first applied. In the meantime, a seven-hour time difference makes it tough to find time to talk each day, and they are wondering when they'll be able to start building the life they had planned together. “I am here working with a permanent job contract, we have purchased an apartment and want to contribute to society here,” the teacher explains. The couple have even begun to consider the possibility of her leaving Sweden so that they can finally be together, possibly in a different European country, something she says would be “awful” after settling in and progressing in her job here.

A Migrationsverket spokesperson told The Local that the average processing time for family members seeking family reunion – a category including those with a partner in Sweden but also other types of family relationship – was over 400 days in 2017. Between 2015 and 2016, processing times for this kind of visa increased by almost a third, after the huge influx of refugees to Sweden over the same period left the agency struggling to process all the cases. More than 48,000 of these permits were granted last year, but thousands of people, like the McCorrys, are still waiting for theirs to be processed.

The Facebook group 'I väntan på familjen' (Waiting for family) has over 7,000 members who share their experiences of the lengthy process. On a typical day, there are more than ten posts, each met with suggestions and sympathy. It's not the only such group, with similar Facebook communities aimed at specific groups or nationalities each boasting hundreds more members.

The waiting time isn't the only hurdle. From 2016, it's been necessary for the partner in Sweden to demonstrate they can provide financially both for themselves and for the person applying for a permit; they must also prove that they have sufficient living space. And in other cases, even after getting a permit it may take a while to be issued with a Swedish personal number, the lack of which can make it tough to participate in Swedish society, from joining a gym to taking SFI classes to getting a bank card.

But it's not always the bureaucracy that poses the biggest problem. Vilma Alencar from João Pessoa in Brazil applied for her residence permit in late 2012, when processing times at Migrationsverket were far shorter. She had to fly three hours to São Paulo to do the interview at the Swedish embassy, but was able to move over just a few months after her application.

However, as a non-native speaker of either Swedish or English, Alencar has faced other obstacles, particularly regarding her financial situation and the ongoing job hunt. She recommends that anyone embarking on a move should come with enough savings to support them through the first year at least.

“I saved as much money as I could but it wasn't that much, as you can expect for a journalist working in a poor part of Brazil,” Alencar explains. “I have been working and earning my own money since I was 12, so having nothing to do besides going to SFI classes and taking care of the house wasnt exactly easy, especially coming from working two jobs.”

She adds that in Brazil, many people have a misconception that moving abroad is an easy way to improve your career prosepcts and make more money. While Alencar's expectations were more modest, she says she wasn't prepared for her current situation, still job-seeking even after five years in the country and having now learned Swedish. The journalist has tackled the problem by being flexible and finding new hobbies and things to do; she began training in cooking and baking and now hopes to find a job in this sector.

On the other side of the coin, native English speakers and EU immigrants are likely to find the job market more open and the bureaucracy easier to overcome than those making the move from further afield. But the similarities between western European countries can also lead love immigrants from these locations to overestimate how easy the change will be.

In some cases, you'll be moving away from your own home, perhaps giving up personal possessions, and into your partner's house. And if you're moving to your partner's hometown, you'll be living life in their language, in their neighbourhood, with their family and friends close by. This can lead to increased dependence on the partner, potentially changing the nature of the relationship or revealing a new side to their personality, which is particularly tough if coupled with financial dependence due to struggles in the job market.

“You can't expect to replicate your previous life in a new place,” says Nicholas Bean.

The Brit first moved to Gothenburg with his Swedish partner in 2013, and now lives in Malmö. “You have to be ready to adapt to ways of working, communicating, socializing.”

“Make sure you have enough time to study SFI courses. This is something I wish I had done more when I moved. While its not necessary to speak Swedish, it will help you develop and understand the culture more effectively.” “The thing I notice most when I go back is that the UK has a much wider selection of… well almost everything. Food in the shops, clothes, bars, nightlife,” he adds.

While he says the overall experience of moving wasn't too tough, the main challenge for Bean has been meeting new people, particularly as he now commutes to Copenhagen for work. “Scandinavians, as far as I can tell, tend to stick with either old school friends, colleagues or associates through clubs/teams etc. I guess this is a lot like the rest of the world – but when you don't have any of these connections, it can be challenging.”

Matthew Ford, also from the UK, says the social aspect has also been his main challenge since moving.

“I often find Swedes cold, insensitive and just unwilling to connect. Unless you plug away, and sometimes this takes years, you never make friends. Unlike in Britain, people definitely don't feel comfortable chit chatting,” he says.

He first moved to Örebro in 1996 with a former partner. That relationship ended after 18 months, but shortly afterwards he met his wife, with whom he lived in Gothenburg before moving to the UK for several years.

But in summer 2011, the couple decided to return to Sweden with their young children, where they now intend to stay long-term. Ford says they wrote down pros and cons for each country, and while there were things he knew he'd miss about his home country, it was clear that life in Sweden was the best fit for him and the family.

“The pros outweighed the cons massively, and we've not regretted moving back for one minute,” he says. “There are lots of reasons to celebrate moving to Sweden, and I often don't refer to the UK as home anymore!”