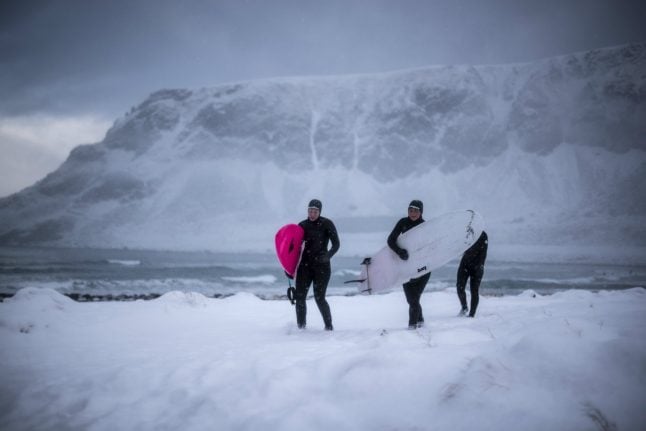 “You come up from the ocean and you're just freaking cold,” says Unn Holgersen.

It's deep winter in this land of the spectacular Northern Lights, flashing green on the horizon, and the water is just four degrees above zero.

“You have to put your feet in a bowl of hot water and you have to change really quickly,” the 32-year-old veterinarian advises.

It may be cold and isolated, but Holgersen has chosen to live on the Lofoten islands because she is addicted to the thrill of winter surfing.

On its snow-covered beaches, she and other dedicated surfers brave the freezing weather — outside air temperature is a chilly minus 15 Celsius — and the ferocity of the ocean.

“I love the feeling,” says one surfer after riding the waves.

That exhilaration is shared by all those who visit the tiny town of Unstad on the islands.

Among them are two students, Christina Kolbu and Solmoy Austbo, who travelled three days in a mini-van to reach the frosty shores.

They quickly change out of their hippy garb, put on thick winter wetsuits and grab their boards to head out into the waiting surf. A surfer puts his board away after a session in Unstad. Photo: Olivier Morin/AFP

Despite the chill, they do not hesitate as they plunge into the glacial waters.

When coming back to shore, they clutch their boards as they clamber up the beach as thick snowflakes fall around them.

Unstad is a favourite site with surfers: a vast open horizon with a series of snow-capped peaks on either side of the beach.

Situated above the Arctic Circle, around the same latitude as northern Siberia and Alaska, its waters remain accessible due to the Gulf Stream, which somewhat warms the ocean current that flows across the Atlantic to Norway's coast.

“Surfing is a lifestyle, it's a must,” says Lisa Blom, a 38-year-old hotel manager.

“We have better waves, quality waves, they're usually bigger, consistent.”

Some of the surfers argue there are even better waves here than in southern Europe or Bali.

“We have nice clear days, there are not too many people and the beautiful scenery,” says Holgersen. “It's the whole package.” 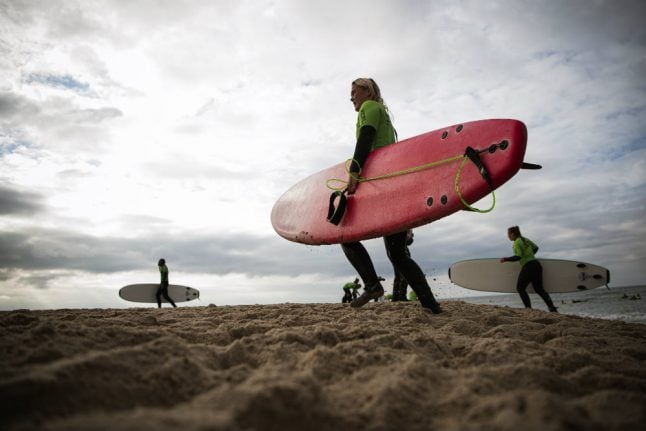 As the name suggests, surfers seeking out the perfect wave near the town of Klitmøller are not put off by chilly waters or nippy air, nor the lack of palm trees.

This raw and rugged coastline, often under grey and bleak skies, has drawn a growing number of board aficionados in recent years.

Covid-19 has “really created a big boom,” says Mor Meluka, a 34-year-old Israeli who settled here with his family 11 years ago.

Surfing enthusiasts from Denmark and nearby countries “used to travel the world”, but now, “since they can't go anywhere we are definitely experiencing more guests than usual,” he tells AFP.

Together with his wife Vahine Itchner, Meluka runs the “Cold Hawaii Surf Camp”, a surf school that employs 15 instructors in the summer months and continues to give daily lessons even in the off-season.

“You can't really know what kind of waves you're going to get. It's always different waves. If you go to a perfect surf place like Bali or Tahiti, you know exactly how the wave is going to break. Here, it changes all the time,” says Itchner, who moved to Denmark at the age of 10 from Tahiti.

A new addition to the world's surfing hot spots, it has yet to be invaded by the masses.

Klitmøller, a town of just 1,000 inhabitants, is an unexpected destination for surfers, due to its geographic location and the absence of any surfing tradition.

One of many fishing villages that dot the Jutland coast, the spot has long been popular with windsurfers. Surfers started coming in the 1990s, with locals initially eyeing the newcomers with suspicion. 
Nowadays surfing is an integral part of the local culture — and is even part of children's schoolday, with surfing lessons on their schedule.

Sjoerd Kok was one of the early pioneers.

A 42-year-old Dutch computer programmer, he moved here 17 years ago “for
the surfing”. His enthusiasm hasn't waned a bit, as interest in the town continues to soar.

“A couple of years ago I told myself this is the peak… But no, it still expands.”

Itchner and Meluka say they expect surfing to take off across Denmark, a windy country already known for its kitesurfing.

“It's going to become a famous surf spot!” boasts Itchner.

In the land of 'hygge' — the Danish concept of cosiness and comfort that promotes a sense of well-being in daily life — Klitmøller epitomises the art form better than any other place.

“The right word is the word 'cosy': to go surfing and then go home and light a fire and drink a hot chocolate.”