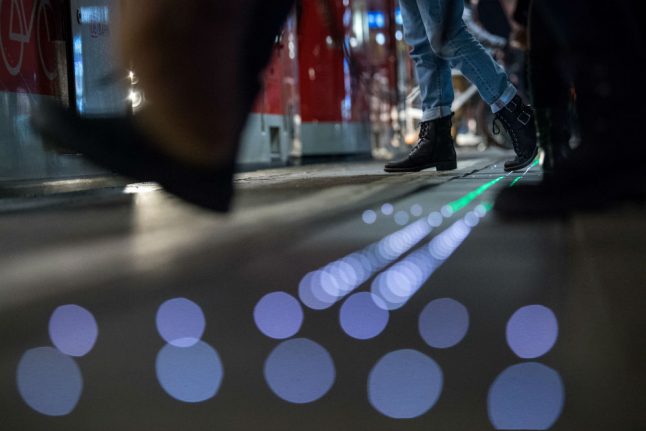 Passengers boarding a train at an illuminated platform in Stuttgart. Photo: DPA

On platform two at Bad Cannstatt station in the Baden-Württemberg capital, a stop-off point for trains on three S-Bahn lines, lights of varying colours on the floor now flash when trains arrive.

These lit-up LED symbols show passengers where arriving trains are meant to stop and where the train doors are going to open.

This will encourage passengers to stand at the appropriate place on the platform so that boarding will be quicker and trains can depart more punctually, states DB.

From Monday onward, the state-owned railway company will be testing the six-month pilot project, which has been named a “dynamic, illuminated guidance system” and is unique across the country.

Further features of the project include the fact that passengers should also be able to find a seat on the train more easily, according to DB.

A colour scale comprising of LED signals shows passengers how many seats are available in carriages. Photo: DPA

During the pilot phase the carriages of three trains will contain cameras which will capture the availability of vacant seats. This information will then be displayed in real time to passengers waiting on the platform.

DB cites that millions of euros in fines which have to be paid by Stuttgart’s S-Bahn each year – predominantly due to chronic tardiness – as one of the major reasons behind the development of the project.

Since the end of 2013, S-Bahn employees have been deployed at the main station in Stuttgart during peak periods to help ensure that departures are not delayed by passengers jumping in at the last moment. This has proven to be useful and will be expanded, DB said.