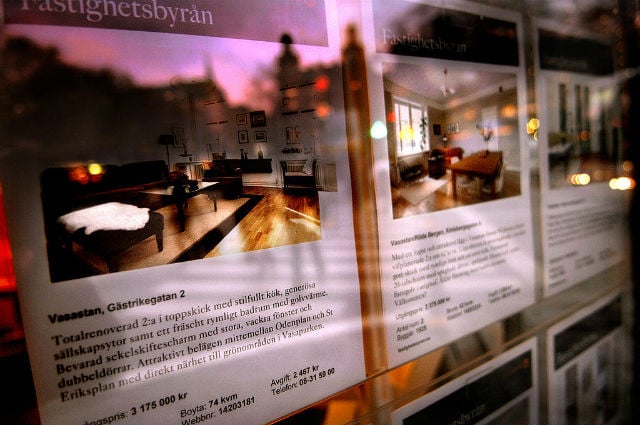 The average price for a second-hand lease crept up in Sweden in 2017. Photo: Tomas Oneborg/SvD/TT

The stats are in and they're not pretty, at least as far as renters' wallets are concerned.

Sweden's tightly controlled rental market means that there's often a long wait to get your hands on a first-hand contract, leaving people battling to get their hands on a second-hand subletting lease.

One of the most popular market places for that is buy-sell site Blocket, which reports that in 2017, some 67,000 subletting listings for home rentals across Sweden were posted to its site.

The website noted in a report about second-hand rental prices published on Friday that not only were there more homes for rent, but they were more expensive too – on average six percent more costly than they were in 2016.

A spokesperson from Blocket suggested that a general slowdown in the housing market at the end of 2017 translated into more expensive rentals.

“There are probably a lot of people waiting to sell their home instead of risking a lukewarm response to a bidding process,” Linnéa Aguero said in a statement.

According to Blocket's adverts, the average monthly cost of a second-hand rental in Sweden is now 8,176 kronor ($1,009), according to the Blocket adverts.

READ ALSO: A beginner's guide to buying an apartment in Sweden

The report found that a one-bedroom flat in Stockholm costs, on average, 8,100 kronor.

Lastly, in Malmö, there were 3,000 such homes added to the buy-sell site, with an average cost for a one-bedroom apartment coming in at 4,900 kronor. One and two-bedroom homes saw price hikes of three and four percent respectively.

It's no secret that housing is expensive in Sweden, but most people find themselves despairing over how hard it can be to find the apartments in the first place. These days Sweden's housing shortage is seen as a nationwide problem, with recent stats from the country's National Board of Housing, Building and Planning (Boverket) showing that 255 of Sweden's 290 municipalities now report a housing shortage.