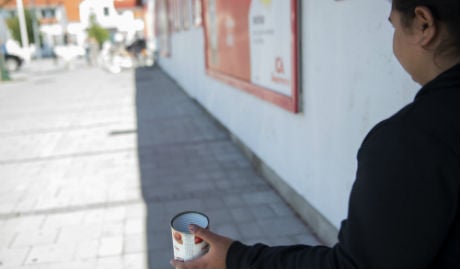 A beggar collects coins outside a supermarket in Skanör, an upmarket beach village in Vellinge. Photo: Björn Lindgren/TT
In August, the county council in Vellinge, southern Sweden, voted to ban begging in response to the arrival of Roma from Bulgaria and Romania who collect money outside supermarkets and in other public places.
But on Thursday, the administrative court in Malmö backed a decision from Skåne's regional government to block the ban.
“It is not clear from the investigation that there have been any inconvenience or disturbances of such magnitude and character that a ban is justified,” the court said in its ruling.
Carina Wutzler, the chair of Vellinge municipal council, pledged to take the case to the Supreme Administrative Court in Stockholm.
“This was pretty much the ruling we expected,” to be honest, she told Sweden's TT newswire. “It seems like we're going to have to try this at the next level to get a precedent set.”
She said she found the court's reasoning “strange”.
“It must be up to the municipality, its inhabitants and its politicians to judge what is best for the municipality.”
According to the court, the municipality had claimed that “passive collection of money in public places” had “created a feeling of insecurity among residents”, by making it difficult for residents to navigate their shopping trollies outside shops and making them nervous taking money out of ATMs when beggars were nearby.
The court concluded that none of these consequences were sufficient to justify a ban under current laws.
Wutzler, who represents the opposition Moderate Party, said that many other municipalities in Sweden were following Vellinge's efforts with a lot of interest, and would follow suit if she was successful.
Url copied to clipboard!