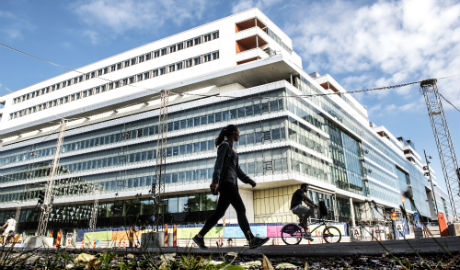 The New Karolinska Hospital is based in Solna in the northern part of Stockholm. Photo: Tomas Oneborg/SvD/TT
More than two years after it was supposed to be finished, the hospital has yet to fully open, while the total cost has ballooned from 14 billion kronor ($1.8bn) to over 60bn ($7.5bn) kronor.
Finance minister Magdalena Andersson said that she felt forced to act after Moderate party leader Ulf Kristersson failed to heed her call for him to ask Stockholm's county authority, which his party controls, to set up its own independent inquiry.
“What has happened at Karolinska is quite exceptional,” she told the Dagens Nyheter newspaper.  “Because nothing is happening, I think it's time for us in the government to look at ways to review and evaluate New Karolinska at a central level.”
As well as cost overruns, the hospital has faced operational problems, with the entire IT system closed down earlier this week so that faulty hardware can be replaced.
“We've got the world's most expensive hospital and it in no way seems to be the world's best hospital,” Andersson complained.
An investigation last year by the Svenska Dagbladet newspaper uncovered sky-high rates billed by Swedish Hospital Partners (SHP) and Coor Service Management, the private companies who hold a 22-year contract to maintain the building, and who charge as much as 1.2m kronor simply to change an ordinary door.
At the same time Dagens Nyheter has reported on how the US management consulting company Boston Consulting Group has billed the hospital 257m kronor over six years,  more than 700,000 kronor a month for each of nine consultants, most of whom were in their 20s.
“It's obviously serious for everyone who pay taxes in Stockholm, and for the Swedish government and parliament who put huge resources into funding health care, but above all, for all patients in Stockholm that have the right to safe healthcare,” Andersson said.
Andersson last year called on the Moderate Party's new leader Ulf Kristersson to order an inquiry into the hospital.
Irene Svenonius, a Moderate party county councillor in Stockholm, accused Andersson of using the scandal for political ends.
“You can tell that it is an election year by the finance minister's tone,” she told DN. “Several audits have already been done, both internal and external.”
“The greatest light was shone on it by an independent study from Stockholm University. I received that last year and it was highly critical of the PPP deal, and the shortcomings in internal auditing.”
Shortly after Andersson's call was published, the Social Democrat party's Twitter account posted an article by Social Minister Annika Strandhäll, attacking the “Moderate Party Prestige project”, and calling on Moderate leader Ulf Kristersson to respond.