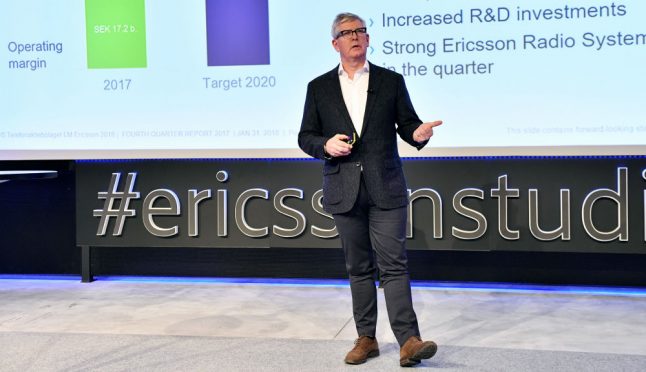 Chief executive Börje Ekholm explains the result at its headquarters in Kista, Stockholm. Photo: Jonas Ekströmer/TT
The loss compared to a 1.6bn kronor ($200m) loss in the last three months of last year, and was more than most analysts had predicted.
“The focus during 2017 has been on reshaping overall strategy and on improving company structure and performance,” explained chief executive Börje Ekholm.
“2017 was also the year when 5G went from vision to real business opportunities while we at the same time had good traction for our 4G portfolio,” he continued.
“We are fully committed to our plans and our targets and expect to see tangible results of our turnaround in 2018.”
He said the company had reduced the number of personnel by “close to 15,000” in 2017, among them 3,000 job losses in Sweden announced in October 2016, with factories in Kumla and Borås worst hit.
The Svenska Dagbladet newspaper reported in August that Ekholm was planning to cut 25,000 more positions outside Sweden, but as yet
The company’s shares were down more than seven percent by late Wednesday morning, as the market digested the total loss for the year of 35.1 billion kronor ($4.5bn).