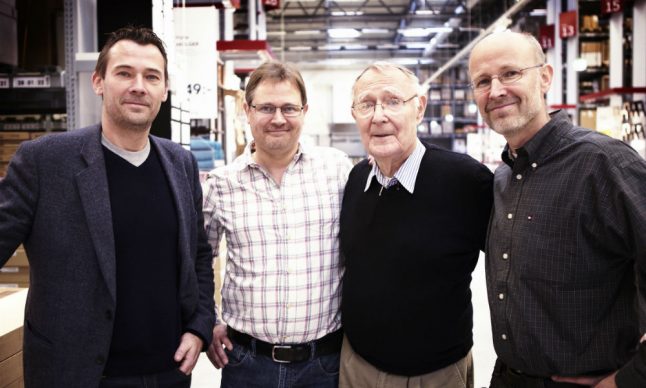 Ingvar Kamprad with his sons (left to right), Jonas, Mathias and Peter. Photo: Ikea
In a statement sent to selected Swedish media, Peter, 53, Jonas, 51, and Mathias, 48, said they felt a duty to their father to ensure that the global furniture giant continued to be run according to their father's values, in the first indication of the continuing role they hope to have in the company.
“We, the sons, have promised him to sustain his legacy and do what we can to ensure the core values and the unique IKEA concept are carried on into the future,” the son's wrote.
In the statement, they also hailed their father as “one of the greatest entrepreneurs ever created” as well as “a fantastic inspiration” for them to follow. “We will miss him tremendously,” they said.
The three sons are famously publicity shy, and have rarely, if ever given interviews. They no longer have operative roles in the furniture giant, with Mathias, seen as the most business-minded of the three, stepping down as chairman of the holding company for Inter Ikea, the brand owner and franchise owner, in 2016.
But Johan Stenebo, who spent 20 years as a senior Ikea executive before writing a hard-hitting insider's account of the company, 'The Truth about Ikea', said that he believed the sons still held ultimate sway.
“They are not brought up and trained by their father in any sort of way where they could hand over control to anyone outside the family,” he told The Local. “The father was quite distrustful of anyone who wasn't a member of the family.”
Anders Dahlvig, one of Kamprad's trusted lieutenants, is now the chairman of a the holding company Inter Ikea Holding, putting him in ostensible control, but Stenebo said that he was still ultimately answerable to the family.
“Anders Dahlberg is chairman but he can be fired at any time. He's not a puppet, but he's very much under the control of the sons. Mathias is the strongman I would say. I think Mathias is definitely at the helm of Ikea,” he said.
“He's placed himself outside the board of directors – as his father did – but he's still running the show.”
According to Stenebo, Peter, the eldest, was the brother Ingvar Kamprad initially hoped would replace him. He trained as an economist at a prestigious business school in Lausanne, and worked in active executive roles inside Ikea for decades, become finance director of the Belgian business.
“Peter is more like an auditor, he's very controlled and into the nitty-gritty. He's very much into detail,” Stenebo said. “When I worked for Peter, he had a very hard time getting his priorities straight, seeing what was a good thing to do at any moment in time.”
Peter is now chairman of the supervisory board of Ikano Group, which runs a bank, insurance company, and property company, and also owns Ikea stores in Singapore, Malaysia and Thailand. He lives in Belgium with his wife Laila.
Mathias Kamprad, the most sociable and ebullient of the three, lives in London.
“Mattias is pretty outgoing, but he's hard to get a grip on. He's supposed to be the more gifted of the three sons,” Stenebo said.
Mathias sits on the supervisory board of Inter Ikea, Ikano Group, and is also on the supervisory board of the Interogo Foundation, the enterprise foundation based in Liechtenstein which ultimately controls Inter Ikea.
Finally, Jonas, 51, who trained as a furniture design in Switzerland, keeps the lowest profile of the brothers. In 2013 was reported to live in a house in Kensal Green, London, designed by the Swedish architect Gunnar Orefelt. He also sits on the supervisory board of Ikano Group. “Jonas is the quiet person,” Stenebo said. “He keeps a low profile.”
Ingvar Kamprad boasted that he had been planning for his death since the 1970s, and he handed over his holdings and board positions in the company back in 2013, leaving a relatively small amount of money for his sons and adoptive daughter from his first marriage to inherit on his death.
As a result, Stenebo said that the issue for the sons was less likely to come from a crack-down on the company's complex holding structure, or a battle over their inheritance, and more likely to come from how to adapt the company to e-commerce.
“The big challenge is not tax evasion*, the big challenge for Ikea is how to handle the whole situation with e-commerce, that's much more complicated,” he said.
“The difference, compared with Ingvar, like with everyone else, is that he was a genius and they're not, but in the past five years they've done a decent job as far as I can see.”

*Ikea has faced repeated criticism over its tax arrangements, however it insists it complies will all regulations
Below is a full copy of the statement from the Kamprad family, provided to The Local.
Kamprad family statement
It is with great sadness and tremendous grief that we announce that our father Ingvar Kamprad passed away last night. Ingvar died peacefully at his home in Sweden – surrounded by his closest family. He has been a fantastic inspiration to us, his sons, to our families and to all the people who have either worked for the groups of companies he founded or who have done business with these groups over the last 75 years. What he has achieved through his 91 very active years is simply incredible. We will miss him tremendously.
Ingvar was one of the greatest entrepreneurs the world has ever seen. He kept his ear to the ground until his very last days, ensuring that everyone stayed true to the unique IKEA concept and values that have made it so successful. Nothing was more important to him than ensuring the continued strength of the groups of companies he founded and thus securing the jobs of hundreds of thousands co-workers around the world – in addition to making quality home furnishing affordable to as many people as possible. Ingvar energized us all through his dream and vision to create a better everyday life for the many people.
We, the sons, have promised him to sustain his legacy and do what we can to ensure the core values and the unique IKEA concept are carried on into the future.
Älmhult, 28 January 2018
Url copied to clipboard!