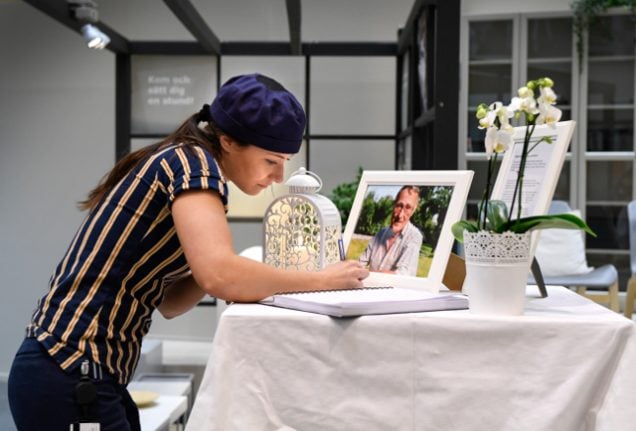 Tove Laxvik, who works in the restaurant at Ikea south of Stockholm, writes her name in a condolence book. Photo: Anders Wiklund/TT
Shortly before midday, staff issued an announcement over the PA systems, informing customers and telling them to prepare themselves, and then at at exactly 12pm, the stores became completely silent.
“Hopefully everyone will respect it and we believe they will,” said Jakob Holmström, press spokesman for Ikea in Sverige, said on Monday morning.
“We want to take that moment of reflection to embrace the memories of Ingvar, and we really like the idea of doing this together with our customers.”
Ikea has 25 department stores spread across 17 cities in Sweden, including two in Älmhult, the town in Småland in rural Sweden where the company was founded and still maintains its headquarters.
Kamprad will be buried in a private ceremony for close family and friends, while Ikea executives will hold an internal memorial ceremony in Älmhult on Friday.
READ ALSO: The life and times of Ikea founder Ingvar Kamprad