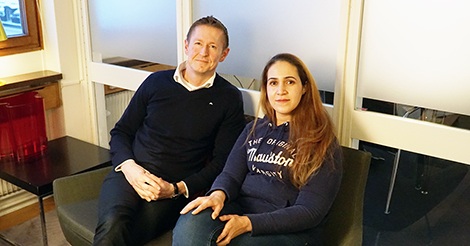 Klas-Magnus Hilberth (left) wrote an open letter to Swede's migration minister in support of Safinaz Awad (right). Photo: Sweet Systems
Two weeks ago Safinaz Awad, 32, received a letter from Sweden's Migration Agency informing her that she would be sent out of Sweden at the end of this month.
On Monday she worked her last day at Stockholm-based IT company Sweet Systems, and on Tuesday she expects the agency to tell her when she has to have left Sweden.
“It's really terrible, and my family is really sad,” Awad told The Local. “I waited a long time for this job. It was my dream job and I've lost everything.”
Sweet Systems' chief executive Bodil Ekström said that in her five months at the company, Awad had already shown herself to be an outstanding employee.
“It's because of her programming skills, but also because she's a woman,” she said. “We are always looking for women in tech. Women tend to be better at seeing the big picture.”
She said that the 'tech case' Awad had prepared as part of the recruitment process had stood out from those of other candidates.
“She showed us some new perspectives on what to do with our software,” she said. “She's very good at business intelligence as well as programming.”
Alexandra Elias, a press officer with the Migration Agency, said that Awad should not have applied to stay in Sweden as a refugee in the first place. Awad had previously received asylum in Greece, when she first arrived in Europe after fleeing a war-torn Syria.
“Someone who has already received asylum in one European country cannot re-apply to be a refugee in another European country,” she told The Local, referring to the rules of the Dublin Convention.
“It's sad because if she had applied for a work permit from the beginning, I don't see why it would have been a problem for her to come to Sweden.”
But Awad said she still felt she had been treated unfairly by the authorities.
“Why did you let me work for two years, if it's not allowed for me?” she said. “Why did you make me work for two years, if you are going to shoot me out?”
Ekström and Sweet Systems' founder Klas-Magnus Hilberth now plan to launch a media campaign to pressure Sweden's authorities over Awad's case.
Hilberth on Friday published an open letter to migration minister Heléne Fritzon and business minister Mikael Damberg, attacking the decision, while Ekström plans to pressure Sweden's state employment agency Arbetsförmedlingen to help arrange a work permit rapidly, using a new fast track certificate.
“Hopefully we will have her back within 60 days,” she said. “We're going to challenge Arbetsförmedlingen in the media to see how quick they can be.”
In his letter, Hilberth pointed to the apparent disconnect between the government's rhetoric on skills and immigration and the reality on the ground.
“My question to you political decision-makers who go on endlessly about how us employers have to step up and use these people's competence and say that diversity creates dynamism and competitiveness,” he wrote, “is how are we supposed to understand your decision and the rules behind it?”
In the meantime, the company plans to rent a flat in central Athens, where Awad, her husband and her three-year-old son can live while they await the decision.
“It's really horrible for all of us,” Awad said. “My son has already started school, and he has some friends here, so he's really happy. It will be a big change for him.”
Awad is the latest in a succession of skilled computer programmer to face deportation, with the campaign against the deportation of Pakistani app developer Tayyab Shabab winning the backing of some of the leading lights in Stockholm's tech industry, such as Spotify founder Daniel Ek.
In December, Sweden's government brought in an amendment to Sweden's work permit law aimed at preventing foreign workers being deported over mistakes made by their employers, so long as employers correct the mistakes before they are detected by the Migration Agency.
READ ALSO: Why is Sweden deporting its foreign professionals?