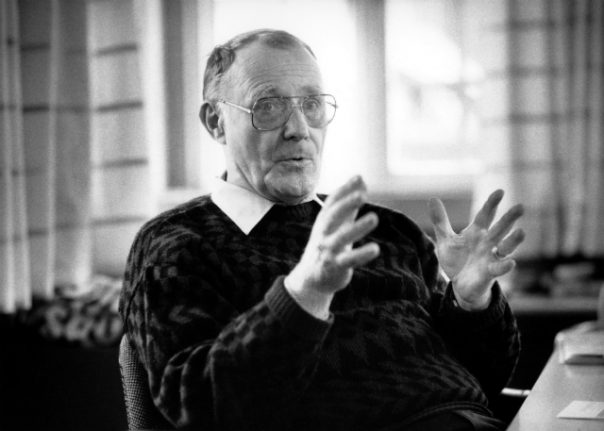 He was born in 1926 in Småland county, in southern Sweden

He grew up in a farm in southern Sweden

His family’s farm was called Elmtaryd, and was near the village of Agunnaryd in Småland.

His father was a German immigrant

His grandfather Achim moved to Sweden from Germany with wife Franziska and sons Feodor and Erich in 1896.

He began selling matches at the age of five. By age seven, he would cycle around the local area and make sales to neighbours. Later on he started to sell fish, Christmas decorations, pens and pencils.

Money box. Ingvar Kamprad sold fish to farms close by using his mother’s bike. The money from the sales was put in this little box. Photo: © Inter IKEA Systems B.V. 2017

In 1943, when he was 17, he registered a company called Ikea. The acronym contains his initials, Ingvar Kamprad, and those of Elmtaryd and Agunnaryd, where he grew up.

He needed authorisation from his father and his guardian

Young Kamprad needed permission to start a business. He had a document from his father, but also needed the signature of his main guardian. He got on his bicycle and went to see him in Bankaboda, near Agunnaryd. After some convincing, he got his signature.

Ikea was originally a mail order company with no stores

In its beginnings, Ikea sold everything from pens, wallets and picture frames to watches, jewellery and nylon stockings.

It only started selling furniture in 1948

When first introduced to the Ikea line, furniture was produced by local manufacturers in the forests close to Kamprad’s home.

Ikea opened its first showroom in 1953, during a price war with one of its competitors. In order to avoid jeopardising quality as the prices fell, Kamprad decided to open a showroom, where people could see and touch the products before ordering them.

Its first store opened in Älmhult in 1958

The shop was the largest furniture display in Scandinavia at the time, with 6,700 square metres.

He was boycotted by Swedish suppliers

Which is what drove Ikea to start designing and producing its own furniture.

He wrote a manifesto

He wrote ‘The Testament of a furniture dealer’ in 1976. The nine-point document lays down the essence of Ikea.

He was awarded several medals, orders, and honours

Kamprad was awarded a H. M. the King’s Medal (H.M. Konungens medalj), the Royal Order of Vasa (Kungliga Vasaorden), and the gold medal from the Swedish Academy of Engineering (Ingenjörsvetenskapsakademiens stora guldmedaljen). Kamprad with his H. M. The King's Medal. He received a 12th size with the ribbon of the Order of the Seraphim. Photo: Janerik Henriksson/TT

And a Lifetime Achievement Award from the Swedish Chamber of Commerce

His portrait has gone down in history

A photographic portrait of Kamprad was presented to the National Portrait Collection as Honorary Portrait in 2010. The collection, housed at Gripsholm Castle, is the world’s oldest national portrait collection, with over 4,600 portraits from the late 16th century to the present.

He was known for his frugality

There are a number of anecdotes about his lifestyle, including that the billionaire only flew economy class, stayed in cheap hotels, and replaced minibar bottles with ones bought in the supermarket. He also said he only bought second hand clothes. He spent over 40 years living abroad

He moved to Denmark in 1973 and to Switzerland three years later. He lived in the suburb of Épalinges, near Lausanne until deciding to return to Sweden in 2014.

He was married twice. He and his first wife Kerstin Wadling adopted a daughter, Annika Kihlbom. With his second wife, Margaretha Stennert, he had threee sons: Peter, Jonas, and Mathias, who gradually succeeded their father in running Ikea.

Upon returning, he lived in a farm in Älmhult municipality, where the Ikea HQ are located, and about 30min away from where he was born. 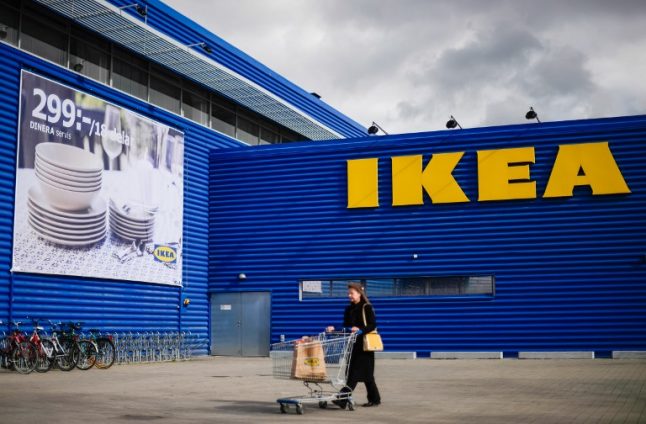 A shopper walks outside the Ikea store in Kungens Kurva near Stockholm, the furniture giant's largest store in Europe. Photo: JONATHAN NACKSTRAND / AFP
Ingvar Kamprad, the founder of furniture giant Ikea, has died at the age of 91. Here are five things to know about the late Swedish entrepreneur and his empire of flat-pack furniture and meatballs:
1. What does Ikea stand for?
Ikea, one of the most ubiquitous acronyms in the business world, stands for Ingvar Kamprad, Elmtaryd and Agunnaryd.
Elmtaryd is the name of Kamprad's family farm in Småland, a small southern Swedish province known for its thrifty attitude and hard-working people, and Agunnaryd is the town where Kamprad grew up.
Ikea's value has tripled since 2000 and is now worth $18.5 billion (€14.9 billion, 145 billion kronor), according to global brand consultancy Interbrand's 2017 rankings — two spots behind fellow Swedish giant H&M.
SEE ALSO: Ingvar Kamprad, founder of Ikea, dies at 91
2. Trouble with taxes
After founding the company at 17, Kamprad's own wealth grew to an estimated at €37.3 billion ($46 billion, 362 billion kronor) in 2017, according to the Swiss economic magazine Bilan.
Despite his enormous success, Kamprad's modest spending habits bordered on the obsessive and in 1973 he fled Sweden's higher tax structure for Denmark, before seeking even lower taxes in Switzerland.
He returned to Sweden in 2014, paying six million kronor ($760,000, €610,000) in taxes. Most of his wealth was held in other assets.
Last year, the European Commission announced that it had launched an investigation into Ikea's tax deals in the Netherlands.
Ikea insists that it complies fully with tax regulations, saying in a 2017 report: “The tax we pay is an important part of our wider economic and social impact.”
SEE ALSO: The life and times of Ikea founder Ingvar Kamprad
3. Best-selling catalogue
First distributed in 1951, Ikea now sends 250 million copies of its catalogue to more than 50 markets in 30 languages, putting it alongside the Bible as one of the world's most popular books.
The 2018 edition was sent to three million households in Sweden, which has a population of 10 million.
Ikea sparked controversy in 2012 when women and girls were airbrushed out of pictures in its Saudi Arabian catalogue, prompting a strong response from Swedes, who pride themselves on egalitarian policies and a narrow gender gap.
4. Billy, the star bookcase
Ikea's revolutionary self-assembly model was conceived in 1956 after an employee suggested table legs be removed so the package would fit into a car.
Using the same principle, the iconic Billy bookcase comes in a flat pack along with an assembly guide and the necessary tools. Designed by Gillis Lundgren in 1979, tens of millions of Billy bookcases have been bought — and Ikea still sells one every 10 seconds.
5. Meatballs
The food portion of Ikea's empire, which includes in-store restaurants and grocery stores, generated €1.8 billion in sales last year.
The company's trademark item is traditional Swedish meatballs, but it also serves 100 million cups of coffee each year.
Url copied to clipboard!