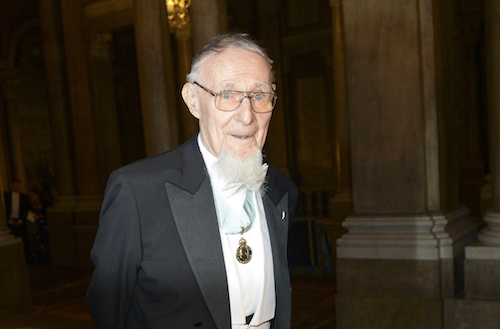 Ingvar Kamprad pictured at a reception at Stockholm's royal palace in 2015. Photo: Fredrik Sandberg/TT
Kamprad “passed away peacefully surrounded by his loved ones” at his home in the southern Swedish region of Småland on Saturday “following a brief illness”, Ikea said in a statement.
Sweden's Prime Minister Stefan Löfven was among the first to pay tribute to a man whose company, with its blue and yellow colour scheme, the idiosyncratic Swedish names for its products and the Swedish delicacies in its canteens, was for many people around the world synonymous with Sweden.
“I have received the sad news about Ingvar Kamprad's passing. My thoughts today are first and foremost with his family and friends. Ingvar Kamprad was a unique entrepreneur who meant a lot for Swedish business and who made interior decorating accessible for the many, not just the few,” Löfven said in a written statement to news agency TT.

The founder of IKEA and one of the greatest entrepreneurs of the 20th century, Ingvar Kamprad, has passed away at the age of 91. pic.twitter.com/DxyALH1LQ9

King Carl Gustaf also played tribute to Kamprad and the role he played in promoting Sweden.
“Ingvar Kamprad was a true entrepreneur who through his life work with Ikea helped bring Sweden to the world,” the king said in a statement.
“He was a down to earth person with a high degree of engagement. The queen and I had the privilege last summer to work with him on the issue of housing for the elderly. My thoughts and the deepest sympathies of my family and I go to Ingvar Kamprad's family and friends,” King Carl Gustaf continued.
Kamprad's close friend Bertil Torekull told the Swedish daily Aftonbladet that the industrialist died from pneumonia which he contracted after a visit abroad, aggravated by “the frailty of old age”.
Inter Ikea Group CEO, Torbjörn Lööf, said: “We are incredibly sad about Ingvar's death. We will always remember his dedication and commitment to always working for the many. To never giving up, always trying to be better.”
Jesper Brodin, CEO of Ikea Group, said it was a “sad day for everyone at Ikea and for all of us who knew Ingvar. Ingvar was 91 so in a way he was mentally prepared for this, but the first thing one feels is sadness.”
Swedish agriculture minister Sven-Erik Bucht, a close friend of Kamprad's, said he remembered a “considerate Ingvar, who always cared about other people. We would often call each other and he would always ask 'how's your mum? Give her a hug from me.' He had a big heart.”
Kamprad was born on March 30th 1926 in Pjätteryd near Älmhult in the southern Swedish province of Småland. He founded Ikea in 1943 at the age of 17. In its early form, Ikea was a mail order company that sold everything from pens, wallets and picture frames to watches, jewellery and nylon stockings.

The name of the company is an acronym containing his initials, Ingvar Kamprad, and those of Elmtaryd and Agunnaryd, where he grew up.

The company pioneered flat-pack furnishing and is known for its obsessive focus on cost, something that has endeared it to generations of furniture buyers. Kamprad was known for his personal frugality, said to be a regional characteristic of his native Småland. He was known for flying economy class and claimed to only wear second hand clothes.
Kamprad was also known for his ties to the Swedish Nazi party as a young man.
Sweden was neutral in World War II, and its Nazi party remained active after 1945. Kamprad said his German grandmother Fanny was the reason for his attachment to the party: she was from the Sudetenland, a German-speaking part of Czechoslovakia where Hitler was viewed by many as a liberator. The Ikea founder said he stopped attending Nazi meetings in 1948.
Despite Ikea's Swedish identity, Kamprad spent forty years of his life living abroad, mostly in Lausanne, Switzerland. The company's headquarters is now in the Netherlands, though it retains a significant presence in Älmhult, close to where Kamprad grew up.
The move to the Netherlands as part of a complex tax planning scheme was controversial, not least in Sweden.
The Financial Times reported in December that Ikea was believed to be using a range of loopholes in the tax systems of the Netherlands, Belgium, Luxembourg and Liechtenstein, through which it shifted royalties between the countries. The FT reported that the company had used the loopholes to avoid paying nearly a million euros in tax. The European Commission has started an investigation into Inter Ikea Systems, a holding company in the Netherlands that owns the Ikea brand.
Starting in 2010 Kamprad gradually made way at the helm of the company for his three sons. He finally returned to live in Sweden in 2014, saying he wanted to be closer to friends and family.
In 2017, Kamprad and his company were handed the Nordic Language Award for their promotion of Scandinavian languages. Ikea products are named after Swedish, Danish and Norwegian places and words. Customers around the world are thanked with a 'tack' and are offered products like the blackout blind 'tupplur' ('nap' in Swedish).
READ MORE: Ikea praised for making Swedish language pöpular around the world
“At Ikea, we always place great emphasis on promoting what's unique about Scandinavian culture and our Scandinavian values. This is the core of our strategy and part of what makes Ikea what it is today – a successful global furniture and home furnishing company,” Kamprad said in response to the honour.
Fredrik Persson, chairman of the Confederation of Swedish Enterprise, said Kamprad was “one of our greatest ever entrepreneurs.”
“Ingvar Kamprad conquered the world with his business idea and put Sweden on the world map. He demonstrated what is possible and inspired me and others,” he told news agency TT.
He also received more formal honours from the Swedish King, including H. M. the King's Medal (H.M. Konungens medalj), the Royal Order of Vasa (Kungliga Vasaorden).
Ingvar Kamprad was one of the richest people in the world, and it was occasionally even claimed that he was the richest of all. In 2017, Bloomberg put his net worth at $58.7 billion, making him the eighth richest.
Url copied to clipboard!