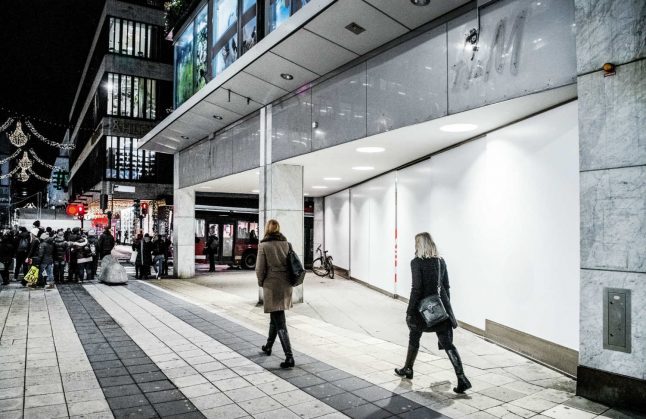 The fast-fashion group is one of Sweden's largest export brands and industrial heavyweights, alongside Ikea, Spotify, Electrolux and Volvo.

Owned by the Persson family dynasty, it has been listed on the Stockholm stock exchange since 1974.

It has collaborated with superstars like Beyoncé and Madonna, and prestigious fashion houses including Sonia Rykiel, Lanvin and Kenzo have designed exclusive collections for the group.

H&M is one of the most well-known brands in the world, with global brand consultancy Interbrand ranking it the 23rd best known company worldwide in 2017 — ahead of Ikea and fashion luxury goods manufacturer Hermes.

But lately, H&M has struggled to lure shoppers into its 4,553 stores around the world, and has been slow to develop its online offering.

“It's (been) one of the toughest years for H&M,” Joakim Bornold, an economist at the investment bank Nordnet told AFP, noting that the company's stock price has fallen by 35 percent since January 2017.

In December, the group announced a four percent drop in fourth quarter sales from the previous year, to 50.4 billion kronor (5.0 billion euros).

Not only have H&M sales almost never declined, but the drop was bigger than analysts had expected.

H&M, which also owns the brands COS, Monki, Weekday, Cheap Monday, Arket and H&M Home, said in December it would be closing stores, but didn't specify how many or where.

The company will publish its full-year earnings report on January 31st.

“They have failed in describing their vision for the e-commerce business and how they plan to compete with truly digital companies,” Bornold said.

“That, combined with worse sales figures than expected, has affected investors' faith in the company.”

“Our digital strategy is crystal clear. E-commerce, for all our brands, is definitely a part of the company that is going very well and is profitable,” insists Persson, heir to the company founded by his grandfather Erling.

At 42, he has headed the group for eight years. Some observers have questioned whether he'll soon be shown the door, though his father Stefan Persson, the chairman of the board, has ruled out such a move.

As if the company's earnings weren't problematic enough, H&M last week found itself in the middle of a social media storm, accused of racism.

Its online catalogue featured an advertisement of a black boy sporting a hoodie with the words “Coolest monkey in the jungle” written on it. According to Gothenburg University marketing professor Eva Ossiansson, the gaffe is a sign that H&M has lost its Midas touch.

“It signals that the company has problems to cope with, both in terms of how their business should develop with regard to e-commerce and the digitalisation in our society, as well as in their communication,” she said.

The company tried to quash the criticism by apologising and withdrawing the ad and the item from sale. But the damage was done.

NBA superstar LeBron James expressed his anger on Instagram on January 9th, hours after the garment was removed from sale.

“@hm u got us all wrong! And we ain't going for it! Straight up!” James said, including a photo of the same ad but with a crown superimposed on the boy's head, and the text on the hooded sweater replaced by a crown.

“Enough about y'all and more of what I see when I look at this photo. I see a Young King!! The ruler of the world, an untouchable Force that can never be denied!” the athlete said.

@hm u got us all wrong! And we ain't going for it! Straight up! Enough about y'all and more of what I see when I look at this photo. I see a Young King!! The ruler of the world, an untouchable Force that can never be denied! We as African Americans will always have to break barriers, prove people wrong and work even harder to prove we belong but guess what, that's what we love because the benefits at the end of the road are so beautiful!! #LiveLaughLove❤️ #LoveMyPeople??????‍⚖️??‍⚖️

Canadian R&B singer The Weeknd, who collaborated with H&M on its spring and autumn collections last year, meanwhile severed his contract with the company.

“In some cases, in order to create a buzz, companies like to stretch their communication and commercials beyond borders,” Ossiansson said, adding: “It's risky.”

Lisa Magnusson, editorialist at Swedish paper of reference Dagens Nyheter, meanwhile played down the scandal, saying people should be more upset about the working conditions of the labourers in Asia who make H&M clothes for pennies.

She noted that if every garment were sold for just three kronor more (0.3 euros), those workers' salaries could be doubled.