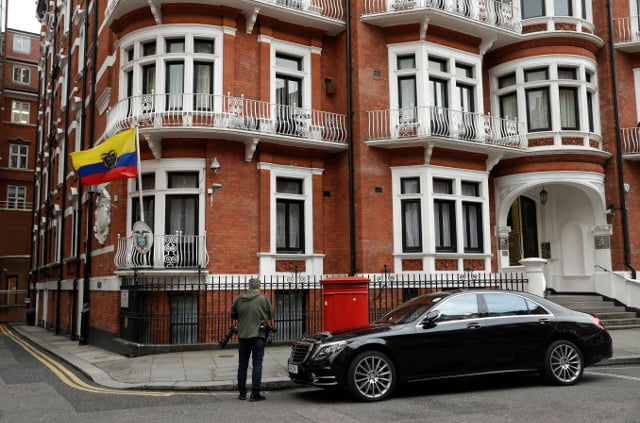 The embassy where Assange has been living since 2012. Photo: Matt Dunham/AP

The pale, lanky Australian, a former computer hacker, is at the centre of a dispute that his supporters see as a battle between digital rights crusaders and over-mighty governments.

He has defied the US army and the Central Intelligence Agency with a torrent of damaging leaks that has led some officials in the United States to call for his imprisonment.

And lately he has become embroiled in a row over hacked emails belonging to US presidential candidate Hillary Clinton, facing claims of collusion with Russia.

Assange fled to the Ecuadorian embassy in 2012 to avoid extradition to Sweden, where he faced accusations of rape and sexual assault.

Swedish prosecutors dropped their investigation in May last year, but Assange still stays indoors, fearful that he will be arrested for breaching his bail the minute he emerges from the embassy.

The 46-year-old and his supporters believe the Swedish case was a trick to have him extradited to the United States and tried for publishing government secrets.

However, media reports suggest there are attempts in Washington to have the investigation dropped if Assange offers proof on who was behind the Clinton leaks.

US intelligence officials have blamed Russia, something WikiLeaks has denied.

Relations have also frayed with Ecuador in recent months following Assange's outspoken support of Catalonia's separatists, and Quito has warned him to avoid making statements that could harm its international relations.

A British government spokesman said Thursday “the granting of Ecuadorian nationality does not in any way change Julian Assange's legal status in the UK.”

“Julian Assange is in breach of bail conditions set in 2012 and chose to enter the Ecuadorian Embassy of his own volition,” the spokesman added.

“The Government of Ecuador knows that the way to resolve the situation is for Julian Assange to leave the embassy to face justice.

“Nobody should pretend that granting him Ecuadorian citizenship is a route to solving this longstanding issue.”

Assange has compared living inside the embassy — a gardenless apartment in London's plush Knightsbridge district, opposite Harrods department store — to life on a space station.

He only very rarely emerges on the balcony, citing concerns for his personal safety, but frequently takes part in media conferences and campaigns via video link.

His radical anti-secrecy agenda has polarised opinion between those who hail him as a hero, and critics who say WikiLeaks has put lives in danger by releasing confidential government documents.

Some of the newspaper journalists involved in working with Assange on his first leaks, including from The Guardian and the New York Times, subsequently fell out with him.

Born in Townsville, Queensland, in 1971, he has described a nomadic childhood and claims to have attended 37 schools.

Living in Melbourne in the 1980s and 1990s, the teenage Assange discovered a talent for computer hacking.

He was soon charged with 30 counts of computer crime, including allegedly hacking police and US military computers, but walked away with a fine.

He created WikiLeaks in 2006 with a group of like-minded activists and IT experts, with the goal of providing a secure way for whistleblowers to leak information.

Assange made its first big headlines in April 2010 with the release of footage showing a US helicopter shooting civilians and two Reuters staff in Iraq.

A month later, the website began to publish more than 250,000 diplomatic cables from 274 US embassies.

In March 2017, WikiLeaks released documents showing how the CIA exploits vulnerabilities in popular computer and networking hardware and software to gather intelligence.

The notion of being spied on by electronic appliances such as televisions made headlines around the world.

The Swedish allegations, based on encounters with two women, emerged in August 2010. Assange was arrested in London in December that year on a pan-European warrant.

A British judge approved his extradition to Sweden in 2011, and after unsuccessful appeals, he applied for political asylum with Ecuador in June 2012 and moved into the embassy.

Assange has at least two children and said that his cat at the embassy — which he has given the Twitter account @embassycat — was a gift from them.