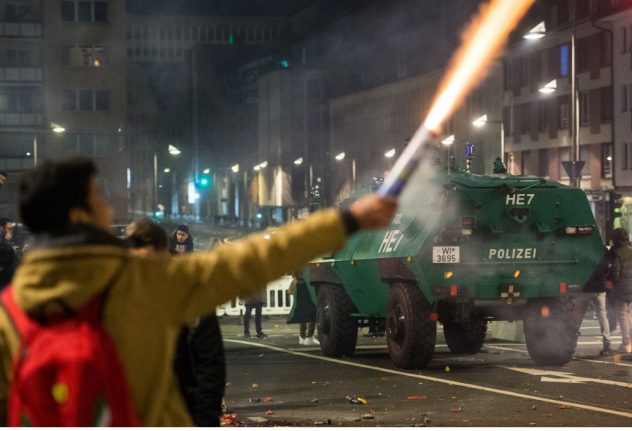 A man setting off a firework on Monday in Frankfurt. Photo: DPA.

“Attacks on rescue workers – no matter when, where and by whom – are completely unacceptable,” Federal Justice Minister Heiko Maas wrote on Twitter.

In Leipzig, 40 to 50 people threw firecrackers, bottles and stones at police officers.

A total of 25 police officers were similarly injured in North Rhine-Westphalia. None of them were so badly hurt though that they had to remain in hospital.

Among other things, Maas said, the Bundestag tightened penalties for the “physical assault on law enforcement officers” in 2017.

“The emergency services deserve our thanks and respect,” Maas added.

Interior Minister Thomas de Maizière also sent a message of thanks to the police and firefighters working during New Year festivities, stating: “Instead of celebrating, you worked so that others could celebrate.”

Wendt has also called for the uniformity of EU-wide safety standards for the production of fireworks.

A firecracker that a group of youths in Brandenburg threw at an 11-year-old boy on Monday, which left him with severe facial injuries, has been described by regional daily Markische Allgemeine (MA) as a “Polish rocket.”

According to MA, it was sold on the Polish border and contains more explosive than rockets which retail in Germany.