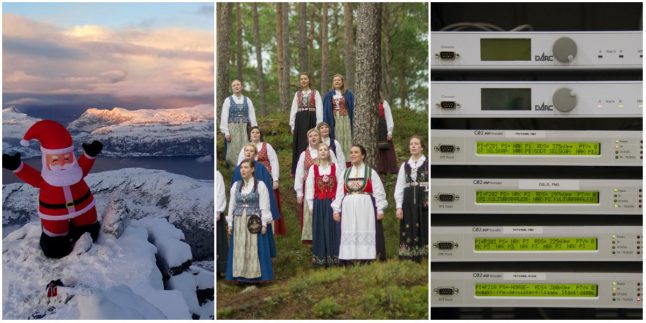 2017 – an election year – has not shied away from providing its fair share of offbeat Norwegian news stories.

Here, in no particular order, we present our selection of the year’s most ridiculous, notable and downright bizarre. Earlier this month, Norway completed its transition to digital radio, becoming the first country in the world to shut down national FM broadcasts.

The move is not universally popular in Norway, and international interest provided a late contender for one of our most-read stories of the year. A far-right Facebook group was mocked when members apparently could not tell the difference between empty bus seats and burka-clad women.

When a user posted a photo of empty bus seats to the Facebook group Fedrelandet viktigst (roughly translated as ‘Fatherland first’), members decried it as proof of the ‘Islamification' of Norway. It was not.

At least 50 cyclists who took part in the TransØsterdalen race at the end of June were struck with fever, stomach pain and diarrhoea, probably due to sheep faeces, which had decomposed during heavy rain and was then sprayed on to bottles, faces and hands. A petroglyph of a boat discovered in northern Norway was estimated to date back 10,000 to 11,000 years – making it possibly the oldest depiction of a boat in existence. An error in Google Maps sent hundreds of early-summer tourists looking for the famous Preikestolen (Pulpit Rock) cliff formation on a narrow, winding detour that ended 30 kilometres away in the village of Fossmork, on the wrong side of the fjord.

At least one visitor made light of the technical glitch, though – according to a Fossmork resident, an American tourist was so taken by the village, he wanted to buy a cabin there.

The Economist's Big Mac Index 2017 placed Norway behind only Switzerland as the country with the most overvalued currency, based on the metric of Big Mac prices adjusted for exchange rates against the dollar.

Once readjusted for Norway’s average income, though, the light-hearted science of ‘burgernomics’ had the Norwegian kroner actually undervalued by 3.3 percent as a function of its Big Mac purchasing power. Google Maps errors were apparently all the rage in Norway this year.

In August, a Turkish cyclist was stopped by police as he was about to begin a three-kilometre incline inside the Oslofjord tunnel after following a Google Maps route into the underpass, resulting in it being closed for 30 minutes.

One of the feel-good stories of the spring followed a box office behemoth onto the list of the achievements of Cantus, the Norwegian choir who sang the opening track to Disney's animated hit 'Frozen'.

An inflatable Santa was given a unique airing at the top of the Hornelen mountain in the Nordfjord region, the result of a quintessentially Norwegian challenge between a group of good-humoured friends. The photos would have made Father Christmas, himself a fan of high altitudes, beam with delight.