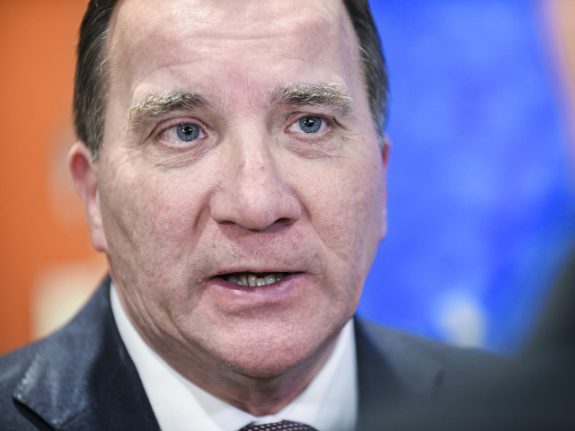 Along with the PM, the protest against anti-Semitism at Stockholm's Raoul Wallenberg Square on Wednesday featured Culture and Democracy Minister Alice Bah Kuhnke, Centre Party leader Annie Lööf and Liberal leader Jan Björklund among the speakers.

In his speech, Löfven spoke about travelling to Auschwitz with 90-year-old Holocaust survivor Livia Fränkel, who told him of her horror and fear while returning there for the first time.

“I recall her words when the Nordic Resistance Movement march with placards bearing photos of Jewish survivors and call them traitors. When firebombs are hurled at the synagogue in Gothenburg. When demonstrators in Malmö make anti-Semitic death threats. It is a disgrace that those who survived have to experience this again. In this age. In our nation,” the PM noted.

“Those who try to legitimize violence and hatred to achieve their goals – whether they are Nazis, religious extremists or left-wing extremists – will be inexorably condemned.”

Löfven also spoke about the need to combat anti-Semitism among immigrant groups, continuing a sharpening in tone on the subject from the Swedish government after Justice Minister Morgan Johansson called on Muslim groups to “minimize tensions” earlier this week.

“Greater efforts are needed to combat intolerance, in schools and in society, not least among immigrant groups from countries where anti-Semitism is strong,” the PM said.

Culture Minister Bah Kuhnke's speech was temporarily interrupted by heckling, later confirmed to be from a member of neo-Nazi organization the Nordic Resistance Movement on the group's website.

Stockholm police said a number of people had tried to disturb the demonstration, resulting in five being removed from the area and one person arrested suspected of agitation against an ethnic group.

“What an embarrassment these spineless Nazis are for Swedish society,” Centre Party leader Lööf wrote on Twitter. Liberal party head Björklund meanwhile labelled them as “loathsome”.

“Everyone who was at Raoul Wallenberg Square this cold evening will continue. We'll continue to raise our voices, continue to work against anti-Semitism and all other forms of racism,” Bah Kuhnke wrote on her Instagram page.

December has seen Sweden trying to get to grips with anti-Semitism in the country following a number of incidents in a short time, such as the chanting of anti-Semitic slogans at a demonstration in Malmö and Molotov cocktails being thrown at a synagogue.

In September meanwhile the Nordic Resistance Movement held a march in Gothenburg which was originally planned to run near a synagogue in the city during holy Jewish holiday Yom Kippur, before a court forced them to change route.