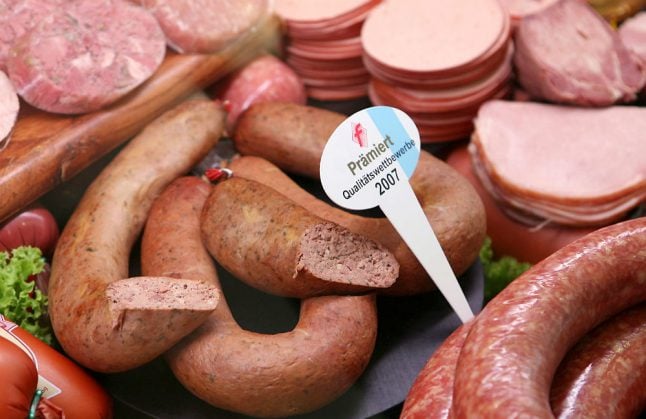 Meat products at a butcher in Bonn. Photo: DPA.

The Federal Cartel Office slapped a €338 million fine on a string of German sausage producers in 2014, accusing them of colluding for decades to squeeze higher prices out of meat lovers.

But the powerful industry hit back with many of the accused exploiting a legal loophole to escape the penalty, leaving just a small group of companies on the hook for a fraction of the bill.

Of the 22 firms and 33 individuals initially fined – including big name brands Herta and Böklunder – just four sausage producers will appear in the Düsseldorf regional court to contest their share of the punishment – some €22.6 million.

They are Heidemark Maesterkreis, Wiesenhof, Franz Wiltmann and Rügenwalder Mühle as well as five company officials.

They deny accusations of belonging to a so-called “sausage cartel” and refuse to pay up.

Eleven other firms have accepted penalties to the tune of some €70 million.

But the remaining companies made use of a legal sleight of hand and simply restructured to make nearly €240 million of the total bill disappear.

Under the loophole – dubbed the “sausage gap” – parent companies could not be held liable for the fines of a subsidiary if that subsidiary ceased to exist.

The legal trickery ended earlier this year with a change in German competition law.

Wolfgang Ingold, the chief executive of Franz Wiltmann, told industry publication Lebensmittel Zeitung he had been advised to employ the same tactic.

“But we have nothing to hide and we want to see that confirmed by a court,” he was quoted as saying.

The legal action is not without risks.

In a worst-case scenario, the court could impose an even heftier fine if it believes the accused have been telling porkies.

A verdict is not expected until May at the earliest.

The “sausage cartel” claims stunned Germans when they first came to light in a country known for its fondness of bratwurst.

Although consumption has fallen slightly in recent years, Germans still eat on average 60 kilos of meat annually, with sausages and processed meats making up around half that figure – equivalent to a hot dog a day.

The cartel was nicknamed the “Atlantic group” after the Hamburg hotel where the first meeting was held to discuss pricing in the early 1980s, according to the FCO anti-trust watchdog.

Acting on an anonymous tip-off, the FCO found that the companies kept in regular touch and colluded to force German food retailers to pay higher prices for their pork and poultry products.

The “wurst” scandal capped a record year for the FCO, coming hot on the heels of €280 million fine imposed on three large sugar producers for anti-competitive behaviour.

The office showed its teeth again on Monday, when it handed a €13 million fine to tugboat operators Fairplay, Bugsier and Petersen & Alpers for conspiring to divvy up assignments at German ports.

A fourth colluding company managed to escape punishment by turning in the others.

Six anti-discrimination groups had taken Twitter to court in France last year, accusing the US social media giant of “long-term and persistent” failures in blocking hateful comments from the site.

The Paris court ordered Twitter to grant the campaign groups full access to all documents relating to the company’s efforts to combat hate speech since May 2020. The ruling applies to Twitter’s global operation, not just France.

Twitter must hand over “all administrative, contractual, technical or commercial documents” detailing the resources it has assigned to fighting homophobic, racist and sexist discourse on the site, as well as “condoning crimes against humanity”.

The San Francisco-based company was given two months to comply with the ruling, which also said it must reveal how many moderators it employs in France to examine posts flagged as hateful, and data on the posts they process.

The ruling was welcomed by the Union of French Jewish Students (UEJF), one of the groups that had taken the social media giant to court.

“Twitter will finally have to take responsibility, stop equivocating and put ethics before profit and international expansion,” the UEJF said in a statement on its website.

Twitter’s hateful conduct policy bans users from promoting violence, or threatening or attacking people based on their race, religion, gender identity or disability, among other forms of discrimination.

Like other social media businesses it allows users to report posts they believe are hateful, and employs moderators to vet the content.

But anti-discrimination groups have long complained that holes in the policy allow hateful comments to stay online in many cases.

French prosecutors on Tuesday said they have opened an investigation into a wave of racist comments posted on Twitter aimed at members of the country’s national football team.

France has also been having a wider public debate over how to balance the right to free speech with preventing hate speech, in the wake of the controversial case of a teenager known as Mila.

The 18-year-old sparked a furore last year when her videos, criticising Islam in vulgar terms, went viral on social media.

Thirteen people are on trial accused of subjecting her to such vicious harassment that she was forced to leave school and was placed under police protection.

While President Emmanuel Macron is among those who have defended her right to blaspheme, left-wing critics say her original remarks amounted to hate speech against Muslims.