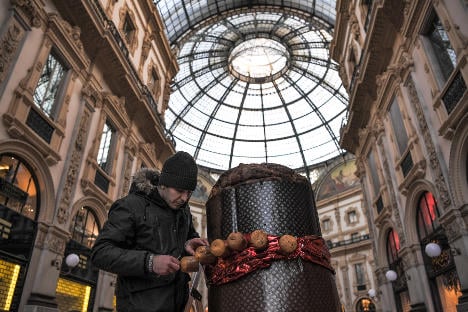 Weighing in at 140 kilogrammes (308 pounds), the two-metre (over six foot) high marvel was sliced up into 1,200 pieces for sweet-toothed tourists and locals at the Victor Emmanuel II shopping gallery near the city's Gothic cathedral.

The Milanese factory makes the traditional cake with its candied fruits and raisins not just for Italy but around the world, with some 200 of the golden buns headed to a New York caterer alone each week.

In the run-up to Christmas “we never stop,” says Bernasconi's partner Savino Moretti, who is retired but comes twice a week to pass on his 50 years of experience to the pastry team.

The pair, aged 67 and 68, say the secret to their success lies in the mother dough, which they inherited along with the shop from the master baker, who made it — so legend has it — by adding a dash of horse urine to the mix for acidity.

It takes 36 hours to turn out a panettone, with raisins and candied peel added to the mix of water, sugar, flour, eggs, butter and vanilla. Once baked, the cakes are hung upside down for 10 hours to allow the butter to drop.

The giant version had to be cooked in a special oven and was baked “a lot longer and more slowly,” Bernasconi says.

“It tastes good, but a little different from usual. It's a little dry, otherwise it would collapse,” he added.

According to the Italian agricultural association Coldiretti, three quarters of Italians will have a slice of panettone at some point over the Christmas holidays — perhaps with a dollop of mascarpone cream or washed down with a sweet liqueur.