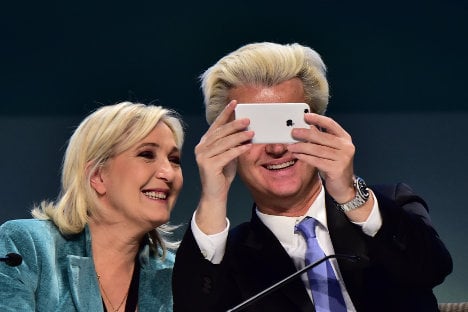 Allied within the Europe of Nations and Freedom (ENF), a European Parliament group established two years ago, the parties — espousing strong anti-migrant and anti-EU views — say they plan to focus on cooperation within Europe outside EU bodies at the conference.

Le Pen, who lost the French presidential election run-off to Emmanue Macron in May, and Wilders, head of the Dutch Party for Freedom, will sit next to Lorenzo Fontana from Italy's Lega Nord or Georg Mayer from the Austrian FPO.

The organisers have also listed Belgium's Gerolf Annemans, Poland's Michal Marusik, Marcus Pretzell from the Alternative for Germany (AfD) and Janice Atkinson, a former member of Britain's UKIP, among the speakers.

Czech police tightened security as left-wing groups announced several protests, including a blockade of the suburban area of Prague where the conference will be held on Saturday.

Police will also have their hands full with Wilders, who is facing death threats over his fiery anti-Islam rhetoric.

Protest organisers include the No to Racism initiative and Against Hatred, another local group.

The conference takes place two months after the far-right SPD (Freedom and Direct Democracy) led by Tokyo-born entrepreneur Tomio Okamura scored over ten-percent support in the Czech general election on a staunchly anti-Islam and anti-EU ticket.

Backed openly by Le Pen, the SPD won 22 seats in the 200-member Czech parliament amid a far-right spike across Europe coming in the wake of the migrant crisis.

Zeman, who once called the migrant crisis “an organised invasion” of Europe and Muslims “impossible to integrate”, is the odds-on favourite in a two-round presidential election slated for January 2018.

Paradoxically, the Czech Republic, which vehemently opposes the EU's quota system for distributing migrants among its members, has received only 12 migrants under the scheme.

Overall, migrant numbers from the Muslim world are very low in this EU member of 10.6 million people as refugees prefer wealthier European countries such as Germany or Sweden.

Czech parties nevertheless still seized on the political capital to be gained from playing on fears over terrorism and economic welfare to campaign on an anti-Muslim and anti-migrant platform.