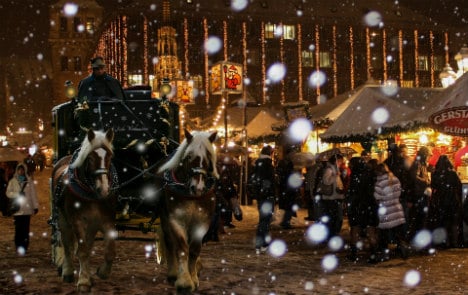 The tallest Erzgebirge step pyramid in the world at the Striezelmarkt in Dresden. Photo: DPA

Where better to start than with Germany’s oldest Christmas market? The first Striezelmarkt took place in 1434 and it was a meat market that only lasted a single day. The same cannot be said for the market in the capital of Saxony.

There is no shortage of variety these days, with the market boasting more than 250 different stalls. Most importantly, make sure you get your hands on some Stollen, a traditional fruit bread. Dresden Stollen is the most famous in Germany, and there is no better place to sample the delicacy.

Surrounded by the beautiful architecture of Dresden, the market also features a famous temporary structure: the 14.6-metre-high Erzgebirge step pyramid, which can be seen from across the old square. A woman wanders through the stone cellar at the Erfurt market opening on Tuesday. Photo: DPA

The charming character of Thuringia’s capital Erfurt has been well preserved, and it lends itself perfectly to a Christmas market.

With narrow old alleyways and traditional craftsmen’s stalls, set underneath the city's magnificent cathedral mound, the Erfurt market has an abundance of old-world charm. It's also great for kids: among other attractions, the market has a fairy-tale forest and a petting zoo.

Don’t miss out on the famous Thuringia Bratwurst (local sausage) and the Erfurt Schittchen (the local version of Stollen loaf). One of the biggest and most renowned German Christmas markets, Stuttgart is a must for those who want to absorb the full Weihnachtsmarkt experience. Nestled in the traditional and traffic-free city centre, it manages to be both vast and cosy at the same time.

Look out for traditional Black Forest goods, such as felted slippers and hand-carved Nussknacker (nutcrackers).

To take full advantage of this wonderful market, make sure to attend one of the free concerts in the beautiful courtyard in the Old Palace. The youth choirs are exceptionally good. The viaduct in Ravenna Gorge near Breitnau shelters the market. Photo: DPA

A couple of hours south of Stuttgart near the French and Swiss borders, the Christmas market in the Ravenna Gorge could not be more different from the huge market of the state’s capital Stuttgart.

Hidden under a viaduct in the middle of the Black Forest, this market epitomizes the traditional remote forest village atmosphere that Christmas fairs try to emulate.

Gently glowing among the tall dark pines, the collection of 40 or so wooden huts offers great present ideas and delicious wintry snacks.

There’s certainly no shortage of Christmas markets in Germany’s capital. For the famous classic ones, head to Gendarmenmarkt, Alexanderplatz or Charlottenburg Palace. But why not try something a little different this winter too?

Lucia Weihnachtsmarkt is located in the Kulturbrauerei in Berlin's Prenzlauer Berg neighbourhood and invites in festive cheer from all over the Nordic world. So here you can knock back a bit of Swedish Glögg while tucking into cured salmon and caviar. The Bavarian city of Nuremberg puts on one of the best markets around. It is also steeped in tradition, and is known as the Christkindlesmarkt (Christ child market) because every year a girl is elected as the Christkind, who opens the market by reciting a festive prologue.

From Bavarian sausage to Lebkuchen (gingerbread) to blueberry Glühwein (mulled wine), you may well emerge from this fair with a paunch to challenge Santa’s. And your sack of shopping will be just as heavy. This might not be one to bring the angelic Christkind to – although the organizers insist it offers the regular Christmas fare, as well as the more distinctive flavour of St Pauli, the district where it is held every year.

St Pauli is famous for the Reeperbahn, a strip full of table dancing bars and brothels, and this market also provides a “Santa Pauli strip tent”. Also on offer are vibrators and a plethora of other “adult products”.

It advertises itself as Germany’s hottest Christmas market, so you may not need Glühwein to bring a glow to your cheeks. Stalls are packed into the market square in central Aachen. Photo: DPA

Steeped in history and charm, the city of Aachen is the perfect setting for a Christmas market. There is no better way to spend an afternoon than meandering through the alleys around the cathedral and town hall of this city, located near the borders with Belgium and the Netherlands.

Expect a wider European influence as it is Germany’s westernmost city, and there are often visitors from across western Europe. The Dutch and Belgian influence can be found in the food and goods as well as in the surrounding architecture. This is one of the most romantic markets around, so couples in Bavaria should wander into the English Garden in central Munich to find this gem of a market.

A vast beer garden in the summer, The Chinese Tower turns into an atmospheric Christmas paradise for the Advent period.

For those wanting the ultimate romantic experience, you can take an hour-long carriage ride through the park, and feel like royalty.

Thousands of people make their way through the Essen market each evening. Photo: DPA

Essen boasts the only international Christmas market in Germany, with 250 stalls run by traders from 20 different nations.

You will still find the German essentials, but you can also browse through Nepalese textiles, Polish crafts and American goods.

So don’t feel restricted to Wurst, Lebkuchen, and Glühwein this Advent, but embrace Christmas cultures from around the world.